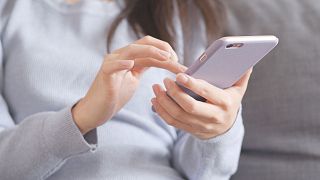 So-called gatekeepers will have to allow users to do things like download the app store of their choice on their mobile phone.   -   Copyright  Canva   -
By Nicole Lin Chang  •  Updated: 02/11/2022

Landmark rules aimed at curbing the dominance of tech giants have come into force in the European Union, bringing major changes to the digital landscape.

The Digital Markets Act (DMA), which came into force on Tuesday (Nov. 1), aims to put an end to unfair practices by companies that act as so-called digital “gatekeepers”.

The EU hopes it will help start-ups innovate and compete with Big Tech, and will give consumers more choice.

It is seen as a change of philosophy in the bloc’s fight against the dominance of large platforms such as Google, Amazon, Apple, Meta and Microsoft, and comes after years of vainly chasing the infringements of multinationals in endless legal proceedings.

The DMA sets out a list of dos and don'ts that companies identified as digital gatekeepers will have to implement.

For example, under the new rules, large platforms are banned from ranking their own products or services in a more favourable manner compared to those of third parties, as Google has been accused of doing with its online shopping site Google Shopping.

The rules also prevent the imposition of pre-installed software on computers or phones, such as browsers or music applications.

Gatekeepers will instead have to allow users to do things like download the app store of their choice on their mobile phone, and give them the possibility to install a default search engine web browser or voice assistant of their choice.

In another key change, gatekeepers will also have to follow interoperability rules that will allow, for example, smaller messaging services to ask gatekeepers to let their users send and receive messages via the bigger platform.

In addition, gatekeepers will have to provide business users with access to the data generated by their activities on the gatekeeper's platform.

The new rules will also prevent these giants from using the data generated on their site by business customers to better compete with them, as Amazon has been accused of doing.

Which companies will be affected?

The act does not name specific gatekeepers, but the European Commission aims to decide which companies fall under this designation by Sept. 6, 2023.

It says gatekeepers will be companies that meet certain criteria regarding the number of users, financial size and where they operate, as well as whether they have an “entrenched and durable position”.

Those gatekeepers will then have six months to come into compliance.

The DMA now moves into a six-month implementation phase and will start to apply on May 2, 2023.

Gatekeepers who violate the new rules could see fines of up to 10 per cent of the company’s worldwide turnover, and up to 20 per cent in the case of repeat offenders.

If a gatekeeper systematically infringes the rules, the European Commission says it will also be able to impose “behavioural or structural remedies necessary to ensure the effectiveness of the obligations, including a ban on further acquisitions”.

“A small number of large companies hold significant market power in their hands,” she said in a statement. “Gatekeepers enjoying an entrenched position in digital markets will have to show that they are competing fairly”.

“We invite all potential gatekeepers, their competitors or consumer organisations, to come and talk to us about how to best implement the DMA”.

Prior to the DMA coming into effect, tech giants had voiced concern about the legislation, which they say could impact innovation.

Google has previously said that "while we support many of the DMA's ambitions on consumer choice and interoperability, we remain concerned about the potential risks to innovation and the variety of choices available to Europeans”.

Apple also previously said it was “concerned” by "certain provisions [which] will create unnecessary privacy and security vulnerabilities for our users, while others will prohibit us from charging for the intellectual property in which we invest heavily”.

This new system could finally make it easier to understand GDPR