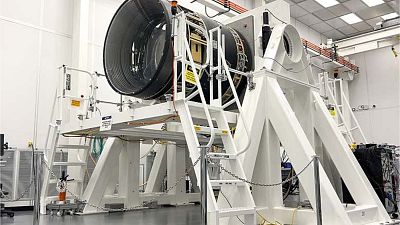 This is officially the biggest digital camera ever made   -   Copyright  Jacqueline Ramseyer Orrell/SLAC National Accelerator Laboratory   -
By Sarah Palmer  •  Updated: 25/10/2022

Engineers in the United States are in the final throes of completing what will officially be the world’s biggest digital camera.

Seven years in the making, three tons in weight, roughly the size of a car and featuring a 3,200-megapixel sensor, the camera has been unveiled by the US Department of Energy’s SLAC National Accelerator Laboratory.

The scientists and astronomers behind it are hoping it will provide new information about some of the universe’s biggest mysteries, including our understanding of dark energy and dark matter. It will also help to analyse billions of as-yet uncharted galaxies.

The camera, standing at nearly two metres tall, is due to complete its final modifications before the end of this year and be installed at the Rubin Observatory in Chile, at the summit of Cerro Pachón, ready to be launched at the end of 2024.

What goes into making the biggest camera in the world?

Well, it involves a 1.5-metre lens, a 60-centimetre focal lens and refrigerating technology.

To put the focal lens into perspective, the standard frame size for a consumer camera is about 3.5 centimetres.

This will enable the camera to produce images of the highest resolution and to pick up objects 100 million times dimmer than what can be seen by the naked eye.

What is the purpose of the camera?

For the next decade, the camera will be based in Chile, at the Rubin Observatory, monitoring the southern sky by capturing panoramic images every few nights.

A big focus of the project is to gain a better understanding of dark energy and dark matter.

Dark energy is the force believed to be accelerating the rate at which the universe is expanding, but it largely remains a mystery to experts in the field.

Dark matter, meanwhile, is the material thought to make up about 85 per cent of the material in our universe.

The camera will also help astronomers see parts of the universe as yet undiscovered by science. Theoretically, it should be able to capture billions of galaxies with its 189 sensors over the course of the next 10 years.