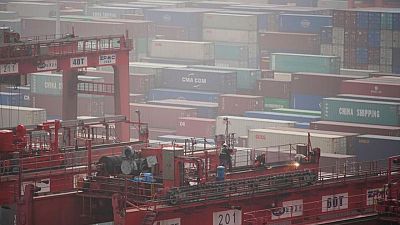 BEIJING – China’s exports to sanctions-hit Russia rose at a double-digit pace for the third consecutive month in September, bucking the trend of weakening external demand elsewhere amid the Russia-Ukraine war and a global economic slowdown.

Reuters calculations based on Chinese customs data on Monday showed shipments of Chinese goods to Russia rose 21.2% from a year earlier in dollar terms, slowing from a 26.5% increase in August yet outperforming China’s overall export growth of 5.7% by a large margin, as interest rate hikes to curb red-hot inflation in major economies weakened demand for Chinese goods.

Imports from Russia jumped 55.2% compared with a 59.3% increase in August, partly driven by a 22% annual rise in oil imports, the customs data showed.

As Western nations have shunned Russia, cooperation with Beijing has become increasingly important for Moscow. Bilateral trade has surged to $136.09 billion in value in the first nine months, up 32.5%.