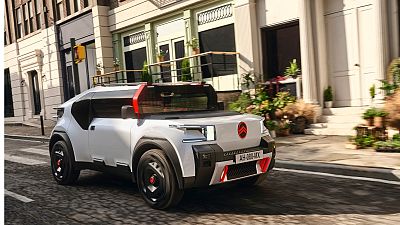 Citroen has unveoled ‘Oli,’ an all-electric concept car that looks rather unconventional with its boxy silhouette and its vertical windshield.   -   Copyright  Courtesy Citroën   -
By Natalie Huet  •  Updated: 29/09/2022

Given its odd shape, you’d be forgiven if it reminded you somewhat of the “Cybertruck” US electric carmaker Tesla unveiled nearly three years ago with a similar promise of affordability.

At first glance, the Citroën “oli” (pronounced all-e, for all-electric) looks unconventional with its boxy silhouette and its vertical windshield, which makes it difficult to tell from the outside what is the front and what is the back of the car.

But its exterior aspect is just one example of how Citroën did away with traditional design to focus on making an electric vehicle that’s lighter, more efficient and uses recycled materials to cut its carbon footprint and manufacturing costs.

Achieving this meant thinking outside the box when it comes to design and materials, Citroën CEO Vincent Cobée told Euronews Next.

“The windshield is shocking, or surprising, or unexpected, because we're used to great aerodynamism on the vehicles, very long windshields,” he said.

“We wanted to make a statement: let's make the windshield vertical. When we do this, we reduce the quantity of glass while improving the visibility. The side benefit is we use less material and we give less weight to the car”.

You could argue a vertical screen is less aerodynamic, but this is not a car made for racing.

“We see it being most useful in urban and suburban areas where people reduce speed and are aware of the environmental and safety aspects of everyday mobility,” said Pierre Sabas, head of Citroën Advanced Design and Concept Vehicles.

The oli is no less unconventional on the inside.

The blood orange backseats are made of a 3D-printed mesh made from lightweight recyclable thermoplastic polyUrethane (TPU).

“They are slim but highly supportive, comfortable and rigid exactly where they need to be,” the carmaker said in a statement.

The interior also features removable speakers and easily washable materials and floors, which can come in handy if you have children who tend to get carsick.

The tailgate of the car folds down, and with its removable load bed panel, the vehicle can be converted into a sort of pickup with extra space for oversized loads; think Ikea furniture or a paddle board.

Oh, did we forget to mention that the panels on the roof and pickup bed are said to be so sturdy you can stand on them? Just in case you didn’t have a ladder and needed a platform to prune your trees or clean your windows.

Another interesting feature of the car is that it’s designed to be more than just a means of transportation. When it’s recharged but not in use, it becomes a mobile source of power that can either be re-injected into the grid or used for other appliances.

A vehicle like this one could also help owners store excess energy from home solar panels, for instance, and sell it back to energy suppliers. It could also be a handy backup in the case of a power outage.

“Imagine when the wind is blowing or the sun is high, let's say 10 am to 4 pm, you charge your car if your car is idle and connected to the grid,” Cobée said.

“When you need it for cooking, let's say 5 to 7 pm, then you discharge the car and then the car is becoming an active part of the grid and you make the sustainable energy generation a usable source of energy for the peak of consumption”.

Cobée said the car was designed to be extremely versatile, “a single family car for all of your uses”. It’s also designed to be recyclable and easy to repair, so it can live for several generations.

But it’s not like it’s going to hit the streets en masse in the foreseeable future. Citroën insists it’s just a concept car, a “laboratory of ideas” for its broader range of vehicles.

“In the next months, you'll see some of those ideas bringing coming to reality on other cars. Maybe one day we'll do something which is inspired by this concept. But we're talking several years down the road,” said Cobée.

If a version of this concept car were to become mass manufactured at some point – like its sister, the two-seater electric “Ami” that’s made many heads turn – the idea would be to ensure it doesn’t cost more than what an average car costs nowadays in Europe, or around €25,000.

“We want to be able to bring individual electric family mobility in a sustainable way, but in an affordable way at the same time,” Cobée said.