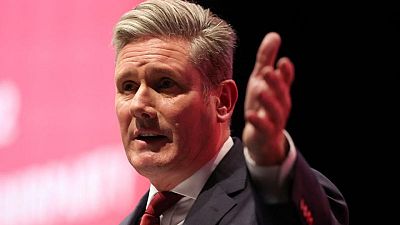 <div> <p><span class="caps">LIVERPOOL</span>, England – Britain’s opposition Labour Party would set up a publicly-owned energy company within a year of coming to power if it wins the next election, leader Keir Starmer said on Tuesday, saying it would lower bills and help deliver energy independence.</p> <p>Starmer said that a publicly-owned company would help ensure that energy produced in Britain benefited the British people, at a time where government has been forced to step in and support people with their sky-high bills.</p> <p>“We will set up Great British Energy within the first year of a Labour government, a new company that takes advantage of the opportunities in clean British power,” Starmer told the party conference in Liverpool.</p> <p>“And because it is right for jobs, because it is right for growth, because is it right for energy independence… Great British Energy will be publicly owned.”</p> <p>Labour are ahead in opinion polls, but no election is expected until 2024.</p> <p>Starmer has called for the support package for bills to be funded through a windfall tax on energy companies, rather than borrowing, and on Sunday announced an aim to make Britain’s electricity 100% green by 2030.</p> <p>Labour said it would work with the private sector to deliver its plans for clean power in strategic partnership with the new publicly-owned firm.</p> <p/> </div>