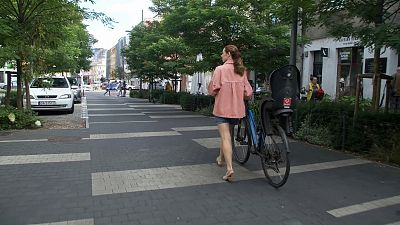 Gdynia in northern Poland has topped polls as the country's "happiest city" and for many years, has been at the heart of an ambitious project for sustainable public mobility planning.

But while improvements have been made, some activists feel that much more still needs to be done.

“Investments have been made in ecological transport such as trams, and electric buses. We want this transport to be modern, but above all, we want it to be safe," Bartosz Bartoszewicz, Gdynia's Deputy Mayor for Life Quality, told Euronews.

"It is also a matter of building frequent connections on a city scale. We also want to develop our mobile app, allowing each resident to choose the most ecological and friendly means of transport and movement available".

While local activists have praised efforts so far, there are a significant number of factors in the management of the city's transport links that have raised red flags, according to Lukasz Piesiewicz, an independent district councillor.

"We have large inconsistencies when it comes to transport projects in Gdynia. We can see some projects are moving forward but when it comes to the number of people using bicycles, for instance, Gdynia stands still," Piesiewicz said.

"Gdynia does not build cycle paths where it needs to, but only where it gets support from European funding. We can see this in the figures: Gdynia currently has 700 cars per 1,000 inhabitants.

"Every year, the share of travel by public transport decreases. Investments such as the construction of an underground car park in the very centre of the city will only deepen this negative trend".

The green aspect of transport initiatives is vital, say activists. On the one hand, the city and activists manage to plant trees along the streets, on the other, there are plans for substantial tree felling related to the construction of new roads.

"There are plans to build a ring road which is related to the largest planned tree felling in years, in the area closest to the centre of our city, our green lungs," Martyna Regent, a local activist from the Miasto Wspólne group, told Euronews.

The impact of climate change is fast becoming apparent and activists are keen to emphasise how important it is that the work of City Hall is a joint effort with the residents.

"We are in the middle of this crisis. We should gather together the best ideas and work together towards a better, healthier, crisis-prepared and more resilient city of Gdynia," said Regent.

You can watch the full report from Gdynia in the media player above.

Cycling nation: The secret to the Netherlands’ biking success