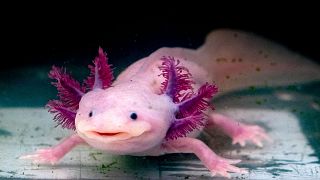 The Axolotl salamander, native to Mexico, are unusual among amphibians in that they reach adulthood without undergoing metamorphosis and taking to the land.   -   Copyright  Canva
By Camille Bello  •  Updated: 17/09/2022

The everyday life of regenerative salamanders whose limbs and organs regrow could be a children's bedtime story about the importance of being resourceful and carefree, but in real life, the genes of these fascinating amphibians are the envy of many scientists around the world.

One of them is Professor Elly Tanaka at the Research Institute of Molecular Pathology in Vienna, Austria, who has been studying salamanders for decades.

She thinks the amphibious animal has the potential to open up new ways to improve how we treat injuries in humans and is currently working to unravel the mystery as part of the EU-funded RegGeneMems project, due to be completed in 2023.

Tanaka and her team are studying the regeneration of body structures in four-legged animals and trying to understand why it occurs in some species and not others, notably in the highly regenerative salamander, Ambystoma mexicanum, commonly called the axolotl.

"Salamanders are the best regenerators among all four-legged animals, and the axolotl is one species of salamander that generates very well, but it's also very easy to breed in the laboratory," Tanaka said in a video interview explaining her work, for which she was awarded the prestigious Ernst Schering Prize in 2017.

The cells of the axolotl can restore an entire organ or limb in the right proportions, and the growth time of the limbs is always similar, regardless of the amount of tissue being replaced. A juvenile axolotl can regenerate a limb in approximately 40-50 days, but as the salamanders get older, regeneration gets slower.

"The topic is fascinating in an almost magical way – how a salamander can regrow an entire leg in the right shape, and with nerves, muscles, and bones is unbelievable," Dr Jan-Michael Peters, Executive Scientific Director at Vienna’s Research Institute of Molecular Pathology, said in the same video presentation.

How do salamanders regrow limbs?

The main mystery Tanaka is trying to crack is how amputating a salamander’s limb prompts its genome to start the process of development from zero.

Tanaka’s strategy has been to first figure out which are the most important cells undergoing the process of regeneration, to then label them and see them in action and interacting.

Our goal is to understand how a successful example of regeneration works in order to know how to promote regeneration in non-regenerative contexts.

The fact that salamanders can regenerate limbs has been known since the 18th century. But what underlies this regeneration on a molecular level has long been a mystery.

As part of the RegGeneMems project, Tanaka’s lab team has now shed light on the intriguing process.

It has identified the group of stem cells responsible for the complex regeneration and the injury-responsive signals that initiate their proliferation.

The research indicates that salamanders use virtually the same molecular mechanisms that were used during the first development of the limb, instead of specific cells, such as fibroblasts in the case of humans, that repair - not regenerate - our wounds.

In other words, the cells of the salamanders are able to reset, become less specialised, and just start from zero. They are then flexible enough to become either bone, ligament, tendon, or cartilage, and also smart enough to grow an exact replica.

Tanaka has also found some crucial factors that contribute to the arrangement of the cells following an amputation, as well as the different clusters of cells that are produced at different sites in the limb which promote, together, the favourable conditions for the growth of the damaged limb.

For example, the types of cells that function in the posterior and anterior part of a limb is different, and they seem to act in concert to achieve flawless regeneration.

What does this mean for humans?

Tanaka does not expect human cells to behave just as salamanders do, but she hopes her team could make a group of human stem cells that can regenerate in the same way the salamander does.

"Our goal is to understand how a successful example of regeneration works in order to know how to promote regeneration in non-regenerative contexts," she explained.

Specifically, she hopes this knowledge will help scientists engineer adult-sized tissues to replace damaged ones. For people with extensive burns or other serious wounds, this could be life-changing.

Tanaka received the EMBO (European Molecular Biology Organization) Women in Science Award for her pioneering work in developing a molecular understanding of limb and spinal cord regeneration in 2020.

She is recognised for having developed new methods to study the phenomenon, which had previously been considered too complex to understand at a cellular level.

Understanding animal biology has been fundamental to investigating numerous human and animal diseases: cancer, respiratory illnesses, Parkinson's, Alzheimer's and endocrine diseases are just some of them.

Scientists design face mask that could detect COVID and other viruses