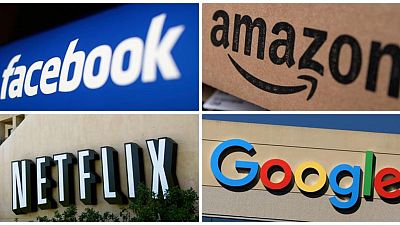 PARIS/BRUSSELS -The European Union’s executive body will launch a consultation early next year on whether tech giants should bear some of the costs of Europe’s telecoms network, EU industry chief Thierry Breton said on Friday.

Europe’s telecoms operators have long lobbied for a financial contribution from U.S. tech firm’s such as Alphabet’s Google, Meta’s Facebook and Netflix, saying that they use a huge part of the internet traffic.

“We also need to review whether the regulation is adapted with the ‘GAFAs’ (Google, Apple, Facebook, Amazon) for example, which use bandwidth (provided by) telecom operators,” Breton told reporters, speaking in French.

GAFA is the French acronym to designate the biggest U.S. tech firms, including Netflix.

Breton said that this particular issue, or so-called potential “fair share” of U.S. tech companies in the financing of the European telecoms and internet infrastructure, will be part of a wide consultation that will entail metaverse — the shared virtual world environments which people can access via the internet.

ETNO, Europe’s lobby for telecoms operators, said in a report in May that more than half of the global network traffic is attributable to six firms: Google, Facebook, Netflix, Apple, Amazon and Microsoft.

These firms have argued that the introduction of any new financial contribution would challenge “net neutrality”, or the principle that internet service providers should enable access to all content and applications regardless of their source.

Internet providers, on their part, have said these companies have conflicting interests by providing competitive services such as voice services and TV and by exploiting their network, acting as free riders.

Breton said the consultation would be launched in the first quarter of 2023 and take five to six months. The EU Commission’s proposals will follow, he said.

Nine lawmakers at the European Parliament have drafted a letter to be sent to Commission President Ursula Von der Leyen, Breton and EU digital chief Margrethe Vestager urging them to ensure that companies generating the largest traffic on network infrastructure should contribute in a fair and proportionate manner to the costs.

The lawmakers, who include Andreas Schwab, Stephanie Yon-Courtin and Paul Tang, also said new measures should be consistent with the principles of the Open Internet Regulation, referring to the bloc’s net neutrality rules ensuring that internet service providers (ISPs) can’t block or throttle traffic to give priority to some services.

“This fairer contribution should not be discriminatory against specific companies, but reflect the role and impact of those generating the most traffic in the network,” they said in the letter seen by Reuters.