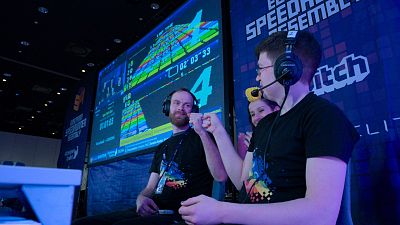 What happens when video gaming is taken to the absolute extremes? A speedrunning marathon is the place to find out.

Here, the world’s fastest gamers, sometimes with tens of thousands of hours of practice behind them, put their well-honed techniques to the test.

Speedrunning is completing a game as fast as possible, using whatever means necessary. This can include everything from exploiting glitches in the software, to tampering with the controls, or just using plain old-fashioned skills.

Despite the common perception of dedicated gamers spending hours alone in front of the computer screen, in reality, in-person events are a big part of the speedrunning scene, including multi-day marathons for the community to meet up, compete and often raise money for charity.

Gidano, founder of the Italian speedrunning community, says: “I think that people get into speedrunning because they love a game so much that they want to play it over and over and learn every aspect of it.”

Learning every aspect of a video game often includes discovering glitches, which are small faults in the programming that the game’s developers did not intend to be there.

International or not, they’re often a nifty way for speedrunners to ‘break’ games and complete them even faster. Glitches can be used to trick the game into taking you to a place you're not supposed to be, for example by jumping through a wall, or to help you kill a foe by disabling its weapons in a fight.

Some speedrunning communities go one step further, and actually tamper with the controls in order to pick up speed, a practice that’s considered perfectly legitimate within the group.

Lafungo is a Super Mario Kart speedrunner, who estimates that he has spent as many as 7,000 hours playing the iconic video game – suffice to say he’s a pro.

“In Super Mario Kart, one of the core techniques, or perhaps even the core technique for advanced play, is the boost,” he says. “It allows you to drive off-road without losing any sort of speed. All that matters is being able to press left and then right without transitioning through no input. We actually modify our controllers.”

Fellow Super Mario Kart speedrunner, KVD, explains exactly how it’s done: “I'll take the back cover off to reveal the magical inner workings of the Super Nintendo controller and lift up the circuit board and underneath is the actual plastic of the D-pad, and you'll see this bump in the middle prevents multiple directions from being pressed simultaneously. We, as a community, shave off or remove this bump, which allows us to perform boosts accordingly.”

Charity marathons play a major part in the speedrunning scene, with gamers across the globe raising over $3 million for charity in 2021.

The first charity event was Games Done Quick in Washington, in the United States, which launched in 2010 and remains the world’s largest event of its kind.

Fredrik ‘Edenal’ Lidholt then set up the European Speedrun Assembly, which brings gamers together in Malmo, Sweden twice a year.

The speedrunners play and stream video games, for seven days straight, day and night, in a marathon effort to raise money for various causes.

The Winter 2022 event was ESA’s first offline event since the COVID pandemic, and the speedrunners set about raising funds for Alzheimerfondern, an Alzheimer's disease research grant foundation.

To encourage donations, they enabled viewers to actively affect the players’ games, for better or for worse – a common way to generate more money at charity marathons.

“Let’s say if you donate $100, you can change the character’s cape to blue, or kill the character and stop all progress.” says Fredrik.

He’s passionate about the potential for gaming to raise vast sums for charity, explaining: “If you go to a cinema, you don't interact. You’re just spectating. Through donations and through having someone on the side to narrate and commentate, that’s a way to interact with the people watching. And I think the engagement is what really drives donations. Charity and gaming is the match made in heaven.”

As well as their summer and winter marathons, ESA also hosts smaller speedrunning events across Europe, such as Break the Record: Live, a three-day competition to break the world record of a particular game.

Fredrik believes the scene is only going to grow in strength, saying: “Speedrunning and ESA has a very bright future. We've raised somewhere between six hundred and seven hundred thousand dollars since we started in 2010.”

He’s planning a mega event for two years’ time, which will take place in a hockey stadium, taking the scene to a whole new level.

He says: “We've never done anything of this size. This is way bigger than anyone in the speedrunning scene has ever done. Definitely. What's the Gretzky quote? You miss all the shots you don't take.”