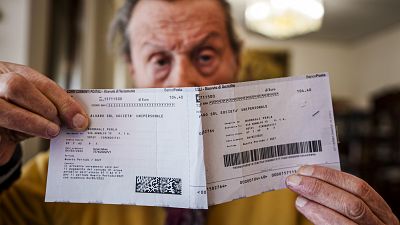 People across Europe have been facing soaring bills this year, as the war in Ukraine fuels an energy crisis.   -   Copyright  Domenico Stinellis/AP
By Giulia Carbonaro  •  Updated: 29/07/2022

The end of the month used to be a time to celebrate for many, who would joyously announce it was “payday” to friends and colleagues before declaring how they would reward themselves for their hard work - with a pint at the pub, a fancy dinner or a shopping spree.

But things have changed in the past few years. First, there was the pandemic, now it’s a combination of inflation and a cost-of-living crisis that’s stripping the payday of its happiness.

For many these days, money coming into their account almost immediately goes out or is already spent, as inflation drives up the cost of groceries and fuel, landlords increase rent and bills keep soaring.

Inflation jumped to a new all-time high of 8.9 per cent in July in Europe for the 19 countries bound by the euro, fueled by rising energy costs.

Electricity wholesale prices have increased in the first quarter of 2022 by 411 per cent in Spain and Portugal, 343 per cent in Greece, 336 per cent in France and 318 per cent in Italy compared to the same period in 2021, according to the European Commission.

There’s no sign of the energy crisis improving any time soon, as Europe prepares for the possibility that Russia will fully cut off its gas supplies in retaliation for Western sanctions over its invasion of Ukraine.

As energy prices surge while wages remain unchanged, some are living salary to salary and others are being forced to decide whether to spend their limited funds on keeping the lights on in their homes or filling the fridge.

Governments are aware that people are struggling, and that things will get worse this winter. This is why many countries across Europe are preparing to help.

In the UK, energy prices this year have been growing more than in any year in the 1970s, when the country was suffering a catastrophic economic downturn. Andrew Bailey, the Bank of England’s governor, said Britons are facing a “historic shock to real incomes” because of these energy bill increases.

The government is stepping in to face this incoming crisis with a £400 (€475.6) energy bill rebate for every household, which will be either paid directly to accounts that have an automatic payment set up towards their energy provider, or which could be separately claimed by the families.

Households that are already struggling to make ends meet and have already received government benefits will also get a one-off “cost of living” payment of £650 (€773) on top of the £400 discount, and pensioners will receive an extra payment of £300 (€357) this winter.

People with disabilities are also set to receive a payment of £150 (€178) to cover the increased cost of living.

Italy, which like other countries in Europe is suffering from being weaned off Russian gas provisions after deciding to reduce its reliance on Moscow, has pledged a €14 billion fuel subsidy and investment plan to keep energy bills in check and avoid increases that would make these unaffordable for many families.

The country is also planning to hand out a €200 bonus to workers earning €35,000 a year or less, and offer a 20 per cent tax credit for energy-intensive companies seeing prices rising over 30 per cent. On the other hand, Italy has announced its intention to tax companies profiting from higher energy prices.

Like Portugal, Spain currently enforces a one-year long cap on gas prices, agreed by the European Commission, which ensures they remain lower than an average of €50 per megawatt-hour.

But France has stepped up its game at the source, forcing the state-owned energy provider EDF to limit electricity wholesale price rises to 4 per cent for a year. The move is expected to cost €8.4 billion.

The country’s domestic tax on final electricity consumption (TICFE) has also been curbed from €22.50 per megawatt hour to only €1 per megawatt hour for households, and €0.50 for businesses. The French government aims for this move to limit electricity price increases to 4 per cent, compared to an expected 45 per cent.

Germany, which has recently struggled to curb its heavy dependency on Russian gas, has approved two relief packages for a total of €30 billion to help its citizens with rising energy prices this year.

According to data from price comparison portal Check24, around 4.2 million German households are bound to see their electricity bills rise by an average 63.7 per cent this year, while 3.6 million will face gas bills 62.3 per cent higher than last year.

The Dutch government, which is expecting inflation to hit 5.2 per cent this year, is offering eligible households a one-off energy allowance of €800.

It's also lowering VAT on energy from 21 per cent to 9 per cent and cutting duty on petrol and diesel by 21 per cent, a cap which will remain in place until the end of the year.

Despite this, Norwegians are apparently still struggling to pay their bills, and the government is mulling other options to help out households this winter.

Terra CEO Do Kwon: 'I alone am responsible for any weaknesses'