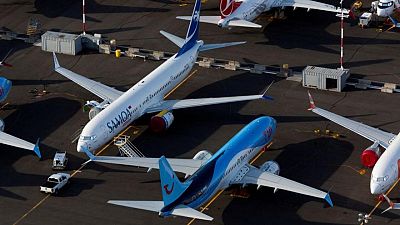 CHICAGO/PARIS – Major aerospace companies are sounding the alarm on their supply chains as shortages ranging from raw materials to castings or semiconductor chips pressure earnings and crimp the industry’s ability to capitalize on roaring travel demand.

Worries about the supply of parts, materials and labour dominated last week’s Farnborough Airshow and are now working their way into published quarterly outlooks.

Airbus cut its full-year jet delivery forecast by 3% and slowed a planned increase in factory production, noting pressure on the engine sector. The world’s largest planemaker has 26 A320-family jets without engines.

U.S. rival Boeing Co cut estimates for 737 MAX deliveries this year and warned that supply-chain constraints had capped its ability to ramp up production despite “significant” demand.

“We continue to work hard on predictability of the delivery chain,” Chief Executive Dave Calhoun said on Wednesday.

On Thursday, France’s Safran – co-owner of engine maker CFM alongside General Electric – warned supply-chain problems would last well into 2023 even as it raised some financial forecasts on the back of currency movements.

Chief Executive Olivier Andries, who had repeatedly voiced concerns about Airbus’s plans for a record hike in aircraft production, said the move by the European planemaker to temper its output plans for 2022 and 2023 was “adapting to reality”.

“This is unlikely to be a quick fix,” said Agency Partners analyst Nick Cunningham, adding that the main problem for Safran involved supplies of castings and forgings from the United States where hiring skilled welders is a major headache.

The world’s largest aerospace contractor, Raytheon Technologies, is dealing with shortages of microelectronics, rocket motors and structural castings. It has a total of 330 suppliers on its watch list.

Chief Executive Greg Hayes said it is adding second or third sources for parts, but Raytheon, which bought United Technologies in 2020, doesn’t expect these pressures to ease until 2023.

The industry is grappling with supply issues at a time when much of the air travel market except China is booming after a two-years slump. Delays in aircraft production and deliveries have made it tougher for airlines to add capacity.

United Airlines, which is aiming to operate more flights next year, has flagged delays in aircraft delivery as a risk to its capacity plans.

To stabilize production and address shortages of engines, raw materials and semiconductors, Boeing, for example, has parachuted more specialists into its suppliers’ facilities. It is also carrying higher inventory to deal with any snags.

In public, aerospace executives talk about working together but in practice small suppliers say the knock on the door from the final customer, Boeing or Airbus, can be a stressful wake-up call. Few are willing to discuss their glitches publicly.

To be sure, manufacturers of all shapes and sizes have been struggling to produce enough to feed current demand and restock inventory after the pandemic fractured global supply chains.

But until now, aerospace has avoided the scale of disruption faced by auto makers and machinery companies, as Boeing and Airbus were building significantly fewer jets than before the pandemic. Airbus is about half-way back to pre-pandemic output.

A pick-up in demand has brought the strains to the fore.

“This is a ramp(-up) that’s going to have us all very much on our toes,” said General Electric Chief Executive Larry Culp.

Culp, whose company supplies jet engines to both Airbus and Boeing, said there is “no silver bullet” to the supply-chain problems as it is a “multi-year task”.

GE has deployed one-fifth of its engineering team to deal with the bottlenecks, which emanate from various suppliers including family-run companies, according to industry sources. It is working to drive up production rates.

Culp, who is broadening his role to include the aviation unit that led the conglomerate to higher-than-expected profit in the second quarter, said the measures had increased supplier throughput by as much as 30%.