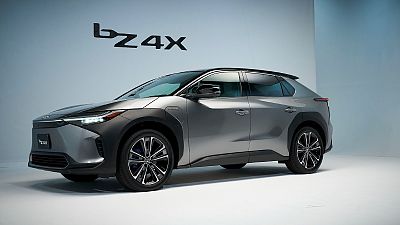 Toyota is recalling 2,700 bZ4X crossover vehicles globally for wheel bolts that could become loose, in a major blow to the carmaker's ambitions to roll out electric cars.   -   Copyright  Handout/Toyota Motor Corp. via AP
By Euronews  with Reuters & AP  •  Updated: 27/06/2022

Toyota is recalling 2,700 newly launched, all-electric SUVs worldwide because of a risk their wheels could come off.

The world's largest automaker by sales submitted the recall of the bZ4X models to Japan's transportation ministry.

Of the vehicles concerned by the recall, about 2,200 were earmarked for Europe, 260 for the United States, 10 for Canada and 110 for Japan, the company said.

"After low-mileage use, all of the hub bolts on the wheel can loosen to the point where the wheel can detach from the vehicle. If a wheel detaches from the vehicle while driving, it could result in a loss of vehicle control, increasing the risk of a crash," Toyota said in a statement on Thursday.

"The cause of the issue and the driving patterns under which this issue could occur are still under investigation. No one should drive these vehicles until the remedy is performed".

Japan's safety regulator said sharp turns and sudden braking could cause a hub bolt to loosen, raising the risk of a wheel coming off the vehicle.

It said it was not aware of any accidents being caused by the defect, but advised drivers to stop using the vehicle until a more "permanent" repair measure was in place.

The news is embarrassing for Toyota, which pledged to spend over $35 billion (€33 billion) to launch 30 fully-electric models by 2030.

Toyota is a relative latecomer to the EV market, which is currently dominated by Tesla, and it rolled out its electric SUV in Japan less than two months ago.

Subaru Corp also said on Thursday it was globally recalling about 2,600 units of the Solterra, its first all-electric vehicle jointly developed with Toyota, for the same reason.