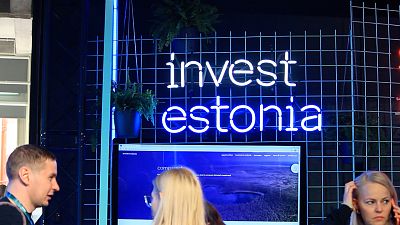 "The challenge for me with e-residency at the beginning was I wasn’t completely convinced it wasn’t a scam," said Vicky Brock, a British CEO and co-founder who relocated her intelligence software company Vistalworks to Estonia.

Brock decided to become an e-resident in the Baltic nation just before the Brexit referendum in 2016, making her a "digital nomad" entrepreneur even before the term became popular.

Not only did becoming an e-resident grant her remote access to Europe’s market after Brexit, but it also provided her with a digital base to manage her business from the United Kingdom and access Estonia’s public and private e-services.

"It wasn't until I went down to London to the consulate to get my blue card that they said, thank you for choosing Estonia. Which was a beautiful thing to say and I started to think this is real," she said.

Becoming an e-resident also allows you to set-up a business remotely and you can do it fast. A new record was set on Monday at London Tech Week by an Austrian entrepreneur, who set up his company in 15 mins 33 seconds on Estonia’s e-residency platform, beating the previous record of 18 mins 3 secs.

Though it may sound too good to be true, the e-residency programme is no golden visa. It does not grant residency in the country but does provide companies with access to European markets digitally.

"We needed to plan how we could work as a tech company that works with security services and government agencies without moving data necessarily out of the EU because we were fearful that that might become restricted after Brexit came in full, which in fact it did," she said.

"So we made all the preparations that we could to run the UK and the EU companies in parallel".

Four years after getting her e-residency, she fell in love with the country’s tech scene to a point that she even decided to permanently move to the capital Tallinn.

Attracting the next unicorns

Estonia’s e-residency programme has attracted over 93,000 e-residents from 179 countries since its launch in 2014.

It brings a wealth of diversity to the country which has a population of just 1.3 million and helps Estonia in its goal to have more unicorns, start-ups with a value of more than €1 billion.

"Estonia is also well known as a unicorn factory, so we really would like to see a lot of innovation happening in the tech side, but also in the deep tech," said Andres Sutt, Minister of Entrepreneurship and Information Technology, adding that his goal is to have 25 unicorns by 2025, which means an additional 15 by then.

With well-known unicorns such as Skype, Wise and Bolt, Estonia has proved it punches above its weight when it comes to its tech champions and start-ups. Despite the diminutive size of its population, it has the most unicorns per capita in Europe.

But the government insists the e-residency programme is not about attracting more residents to the country.

"It's not about having a huge quantity of residents, but having people here who are willing to set up a company, or relocating here. It's for these types of businesses who do more cross-border trade and investment and business in general," Sutt told Euronews Next.

"I would say the e-residency programme is like a digital gateway to our ecosystem, which clearly features efficient public services and ease of doing business," he said, adding that last year 20 per cent of new companies were created by the e-residents.

Digitisation of its services is key to helping e-residents do business more efficiently.

For more than two decades, Estonia has been on a path of digitising all of its services and you can go online to name your child, file your taxes and even vote.

Once the e-residency process is complete, you are presented with an ID card, which allows you to fill out your tax information and do everything in one place online. It does not allow you to travel but grants you the same rights as any other digital business in Estonia.

The Baltic state has had to crack down on companies using the e-residency programme for fraud.

In 2020, it was revealed it was used for some cryptocurrency frauds. But the country is now trying to stamp it out and technology will play a key role.

"We are really encouraging the legitimate business and then setting the hurdle for those who have a different intention as high as possible," said Sutt.

"I think with the help of technology of verification and identification, you can actually track down a big, big part of it," he added.

"You can never get to zero but you can certainly demonstrate that this place is for clean business".

As for if the programme risks making Estonia a tax haven, the government argues that cannot really happen because taxes are paid in the country of principal residence.

If e-residents decide to move permanently to the country, then they pay an average tax rate of 20 per cent and that is only if the start-up makes a profit.

"We'd like to think that our government actually invests in your success because we don't tax the companies until they become successful enough to actually pay out their profits," said Lauri Haav, who heads the e-residency programme.

"If they haven't yet made a profit, if they haven't paid out the profit, we also don't tax them. We only tax them once they become successful".

What's in it for Estonia?

Since the programme’s launch eight years ago, there are now over 21,000 new Estonian companies with more than €10 billion in cumulative turnover to date.

But the government also argues it promotes a more democratic society.

"We believe it really makes running a business very democratic, because in many countries people think that you have to be rich to start the company. We think that if you want to become rich, start a company," Haav said.

We think that if you want to become rich, start a company.

On the other hand, the programme can help build the country’s ageing population as some e-residents may want to become permanent residents.

"We have an ageing population. So to grow an economy when your own population is not growing, you can't do that forever," said Haav.

"You need to be able to get more people in to get more businesses in. So, we see e-residency as one way how to grow the Estonian economy because more entrepreneurial people will come and start businesses in Estonia".

The global start-up community in Estonia is also helping e-residents find inspiration, meet other like-minded individuals as well as being able to access more markets.

"We have this joke in our meeting room. We can't change the weather, but we can change your line visibility," said Natalia and Alexander Storozhuk, who founded the online PR company PRNews in southern Ukraine but registered it in Estonia under the e-residency programme.

They decided to become permanent residents in Estonia three years ago. For Natalia, the best part about becoming an e-resident is finding strength from the community.

"Being in your thirties, sometimes you feel the lack of young energy to pitch, to on-board contacts and clients," she said, adding that having the same enthusiasm when her country is at war has also proved difficult.

But after seeing messages from other e-residents, Natalia says the community gave her back that energy.

"There are people who are really inspiring, well-educated, who are thinking outside the box and I just reflect that energy from them," she said.

Since Russia's invasion of Ukraine at the end of February, the programme has simplified the application process for Ukrainian entrepreneurs. They no longer have to pay the fee of around €300.

"We hope that with this little thing, we can maybe help some of the displaced refugees to carry on their lifestyle," said Haav.

"We have also started a government programme to help any would-be entrepreneurs who are maybe displaced and who are maybe refugees in other countries".

While Estonia may lag behind the UK, Germany and France for the number of start-ups, the diversity of scale-ups created through the e-residency programme may create much more interesting ones.

"The best ideas are formed when you put people from very different backgrounds together and let them sparkle," said Haav.

VivaTech 2022: From climate to Web3, here’s what to expect