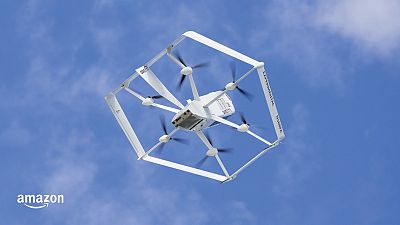 Amazon has said that customers in Lockeford, California will be among the first to receive parcels via drone, as it prepares to launch air deliveries to the public for the first time.

The online retail giant’s new service, called Prime Air, will be available to residents of Lockeford later this year pending final permission from the US Federal Aviation Administration and local officials.

This would be a major milestone for Amazon’s drone delivery project, which has been almost 10 years in the making.

“The promise of drone delivery has often felt like science fiction. We’ve been working for almost a decade to make it a reality,” Amazon said on Monday in a post on its website.

Explaining how Prime Air would work, Amazon said that customers would be able to search for Prime Air-eligible items on Amazon, place an order and then receive an estimated delivery time with a status tracker.

“For these deliveries, the drone will fly to the designated delivery location, descend to the customer’s backyard, and hover at a safe height,” said Amazon. “It will then safely release the package and rise back up to altitude”.

The drones will be able to fly beyond-line-of-sight, meaning that they will not require a visual observer. They will be able to sense and avoid other aircraft and obstacles such as people and pets.

The goal is for customers to get their items safely in less than an hour, Amazon said.

Prime Air struggled to get off the ground

Amazon drone deliveries have been a long time coming. Amazon founder and former CEO Jeff Bezos first announced in 2013 that the company was testing delivery by drone, with a goal of deliveries within 30 minutes or less.

Since then, various setbacks and obstacles have hampered the online retailer’s ability to get the project off the ground.

The company has spent more than $2 billion (€1.9 billion) on the programme, Bloomberg reported.

Amazon’s latest announcement comes amid other drone delivery programmes in development from companies such as Walmart, United Parcel Service and FedEx.