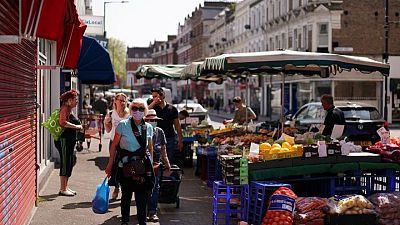 <div> <p><span class="caps">LONDON</span> – Britain’s economy will stagnate in 2023 in the face of high inflation, lagging behind its peers, and the government should consider easing up on tax increases or spending more, the Organisation for Economic Co-operation and Development said.</p> <p>“The government should consider slowing fiscal consolidation to support growth,” the <span class="caps">OECD</span> said in a report on the outlook for the global economy published on Wednesday.</p> <p>It said the government’s tax and spending plans at the moment would be “contractionary.” </p> <p>British finance minister Rishi Sunak last month increased his support for households facing a surge in inflation.</p> <p>But he is under pressure from some lawmakers in the ruling Conservative Party to reverse April’s increase in social security contributions which have helped to take the tax burden to its highest since the 1950s. </p> <p>Taxes on corporate profits are due to rise sharply next year.</p> <p>The <span class="caps">OECD</span> said British gross domestic product would grow by 3.6% this year before flat-lining at 0.0% next year, the weakest forecast for 2023 among all countries in the Group of 20 with the exception of Russia.</p> <p>British inflation was set to top 10% at the end of 2022 and would fall to 4.7% by the end of 2023, it said.</p> <p>The <span class="caps">OECD</span> urged the Bank of England to move carefully with raising borrowing costs and said the government should provide most help to lower-income households.</p> <p>“Monetary policy should continue to normalise gradually to help bring inflation to target. Fiscal policy has to balance gradual fiscal tightening with well-targeted support to protect vulnerable households from the rising cost of living,” it said.</p> <p>The <span class="caps">OECD</span> also called for significant spending and investment to support productivity by Britain’s government.</p> <p>The global report said the war in Ukraine made for a bleak outlook for growth in the world economy.</p> <p/> </div>