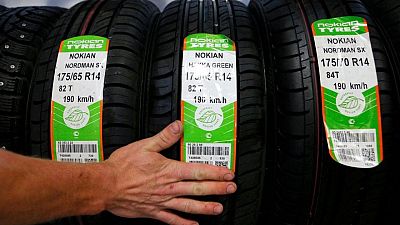 HELSINKI – Finland’s Nokian Tyres is still running its Russian factory and as long as it stays in the company’s hands production there will not support Russia’s war in Ukraine, CEO Jukka Moisio told Reuters in an interview.

The company turned from basking in record earnings to survival mode in February when Russia, host of its largest production plant, attacked Ukraine.

Now the tyre maker is balancing between adherence to sanctions and still making tyres at its factory in Vsevolozhsk, a three-hour drive from the Finnish border. Before the war caused production difficulties, the plant made 80% of Nokian’s passenger car tyres.

Nokian has faced criticism over its decision to stay in Russia from protesters outside its Finnish factory as well as from Olga Dibrova, Ukrainian ambassador to Finland, who in March called for the tyre maker to cut all connections with Russia.

Meanwhile Russia has threatened to seize factories of companies that say they will close production.

“Different kinds of local juridical problems, like talk of a bankruptcy, can arise, if we don’t run it at a reasonable level,” said Moisio, adding that as long as the factory remained in Nokian hands the company would ensure its tyres were “not made for war.”

However Moisio said he now sits in emergency meetings almost daily as the company sketches out different scenarios for how the situation in Russia could play out.

“We are preparing for everything,” Moisio said, even for having the plant nationalised.

“If that was to happen, I don’t think we could do much about it but to make sure the company that is left is solid, has money and can do things it needs to do,” Moisio said.

While a transition period for EU sanctions allows the tyre maker to continue exporting tyres from Russia until mid-July, finding transportation has become more tricky and more expensive, the company says.

“Practically we are short of all key raw materials that come from around the world, from outside Russia,” Moisio said, mentioning rubber, soot and textiles in particular.

After July all tyres need to be produced in the company’s factories in Finland and the U.S but that will not be enough to maintain the pace the company was growing at before the war, Inderes analyst Joonas Korkiakoski told Reuters.

That is why the company’s board and management are seeking new production capacity in Eastern Europe. However that will take time, Korkiakoski said, noting the Nokian’s experience in setting up at Dayton in the United States.

“If we look at Dayton, it will take around 3-4 years from the investment decision to having reasonable production,” he said.