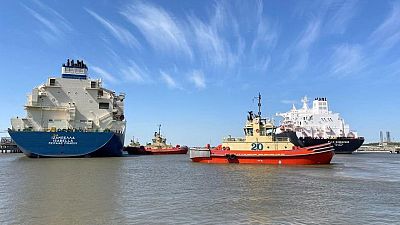 HOUSTON – Soaring demand for U.S. liquefied natural gas (LNG) as buyers steer clear of Russian fuel is putting some long-stalled U.S. export projects back on track. But rising costs for materials and labor threaten to snarl these plants once again.

Two developers with projects sidelined due to the U.S.-China trade war – Energy Transfer with its Lake Charles LNG and Tellurian Inc with its Driftwood LNG – have begun talks with construction provider Bechtel Group over costs, according to a spokesperson and regulatory filing.

Materials prices have shot up 20% in the past two years while gas compressors are 30% costlier, construction and energy experts said. Metals required for LNG projects are in short supply due to Russia’s invasion of Ukraine and could add another 10% to costs, they added.

Higher costs mean lower returns and could give an edge to rivals with newer, modular designs that rely on off-the-shelf components and, in one case, speedier construction using oil platforms for production sites. Costs of U.S. natural gas hit a 13-year high this month, adding to financial hurdles.

“Who knows what LNG terminals are going to cost now,” warned Michael Smith, CEO of Freeport LNG, a Texas firm that started commercial production in 2019 after a four-year construction period.

Steel used to assemble LNG storage tanks is up about 10% this year and nickel, required to make steel and nickel alloys for piping, has gained 40% since February, according to Black & Veatch, which designs and builds LNG terminals.

Rebar, steel used to strengthen concrete, cost more than $1,100 per short tonne on April 8, up 10% since Russia’s invasion of Ukraine, and up 40% from a year earlier, S&P Global Commodity Insights’ Platts assessments show. [IRONORE/]

LNG plants built a few years ago cost about $540 per tonne of annual LNG output, putting the construction of a 10 million tonne per annum plant at $5.4 billion, said Greg Vesey, former CEO of LNG Ltd, which sold its proposed export project in 2020.

The cost hikes are, however, not likely to halt new construction. Wall Street analysts now expect four multi-billion-dollar plants to be approved this year, versus a previous projection of two or three plants.

U.S. LNG exports in March rose to a record 11.9 billion cubic feet per day (bcfd), versus an average 9.7 bcfd for calendar 2021, according to U.S. government data.

But soaring raw materials prices may lead to a revision in contracts and financing needs, weakening potential returns.

Energy Transfer did not reply to requests for comment.

However, it told U.S. energy regulators on March 7 it was working with the engineering, procurement and construction (EPC) provider Bechtel that will “enable EPC pricing updates” this summer. It did not offer an estimated cost increase.

Tellurian added $300 million to its original $15.2 billion EPC contract with Bechtel for Driftwood LNG, spokesperson Joi Lecznar said. She did not say when the increase went into effect or if another is pending.

To cut costs, newer plant developers including New Fortress Energy are employing modular liquefaction units made by Baker Hughes Inc that are prebuilt in factories and can be snapped together like Legos.

New Fortress claims it could put together a plant atop an offshore drilling rig in 12 months.

“Using modular units has the potential to offer savings in both time and money compared with building a complex large-scale project from scratch,” said Robert Songer, LNG analyst at data intelligence firm ICIS.

Sean Morgan, a director at investment bank Evercore Partners ISI, pointed out that the designs allow for “lower upfront capital expenditure commitments by capital providers and the project builders.”

LNG developer Venture Global is installing 18 modular units at its Calcasieu Pass project in Louisiana. The project’s $580 per tonne cost is about 26% cheaper than early LNG export terminals, according Ross Wyeno, an analyst at S&P Global Commodity Insights.

“One benefit is their tendency to not be as sensitive to inflationary impacts,” he said. “By having that savings, we’re able to be competitive on our prices.”