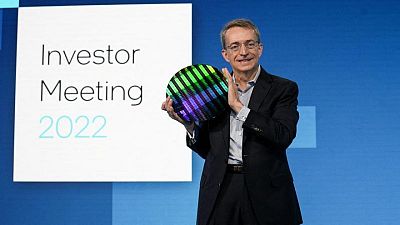 Executive pay has been rising in the United States. Apple Inc CEO Tim Cook earned https://www.reuters.com/technology/apples-tim-cook-paid-over-1400-times-average-worker-2021-2022-01-07 1,447 times the average employee’s salary at the tech giant in 2021. Shareholders of Apple approved the pay package despite proxy advisory firm Institutional Shareholder Services pushing against it.

Intel has asked shareholders to vote in favor of its executives’ compensation at the annual stockholder’s meeting on May 12. It did not immediately respond to a Reuters request for comment.

After Gelsinger took the reins at Intel, once a world leader in chip-making technology, he unveiled a turnaround strategy for the company to regain its dominance in the semiconductor industry, currently led by Taiwan’s Taiwan Semiconductor Manufacturing Co.

Intel’s shares rose 6.8% last year after declining about 17% the year before as the company faced a manufacturing crisis and struggled with competition. The shares were up 0.3% at $52.41 on Wednesday.

Earlier this month, Intel laid out the first details of a $88 billion investment plan spanning across six European Union countries including a massive investment in Germany.

Gelsinger was CEO of VMWare Inc before he returned to Intel as its top boss. He had spent 30 years at Intel before leaving.

His compensation included one-time new-hire equity awards with a target value of about $110 million, according to the filing.