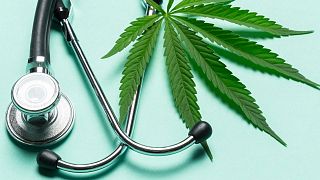 People who use medical marijuana cards to treat pain, anxiety or depression face a heightened risk of addiction while failing to improve their symptoms, a new study finds   -   Copyright  Canva
By Natalie Huet  •  Updated: 24/03/2022

Using medical marijuana to treat pain, anxiety and depression failed to improve these symptoms while doubling the risk of developing cannabis use disorder, a new study found.

The study by Massachusetts General Hospital (MGH) in the United States, published in the journal JAMA Network Open, followed 269 adults from the Boston area with an average age of 37 who wanted to obtain medical marijuana cards.

Because the researchers could not create “placebo” cannabis, participants were divided into two groups: one was allowed to get cards immediately and start using them; the other group waited for 12 weeks before obtaining them.

No improvement of pain, depression or anxiety

The study found that obtaining a medical marijuana card and using cannabis products with the required medical oversight to treat pain, anxiety or depressive symptoms did not significantly improve these problems.

Instead, the obtention of a medical marijuana card significantly increased people’s risk of developing cannabis use disorder - which health authorities typically define as a person’s inability to stop using marijuana even though it’s causing health and social problems in their life.

Those who got cards right away saw "no significant changes in pain severity or anxiety or depressive symptoms," the study found.

However, they did report improvement in insomnia and greater well-being - benefits the study said warranted further follow-up.

Medical cannabis has surged in popularity in recent years, and a dozen countries including the United Kingdom, Canada and Australia - along with 36 US states and the District of Columbia - allow the sale of cannabis for medical use, making it accessible through a medical marijuana card for myriad health conditions.

Cannabis has been reported to improve pain, sleep, as well as anxiety and depressive symptoms and is commonly sought for these concerns.

There needs to be better guidance to patients around a system that currently allows them to choose their own products, decide their own dosing, and often receive no professional follow-up care

However, its use has also been associated with psychotic and depressive disorders, mania, suicide, and cognitive impairment.

“We learned there can be negative consequences to using cannabis for medical purposes,” the study’s lead author Jodi Gilman, of the Center for Addiction Medicine at MGH, said in a statement.

Particularly disturbing to her was the fact people with symptoms of anxiety or depression - the most common conditions for which medical cannabis is sought in the first place - were most vulnerable to developing an addiction disorder.

The findings, the study said, suggest that “a medical marijuana card may pose a high risk or may even be contraindicated for people with affective disorders”.

"Our study underscores the need for better decision-making about whether to begin to use cannabis for specific medical complaints, particularly mood and anxiety disorders, which are associated with an increased risk of cannabis use disorder," Gilman said.

Her team found that participants did not have evidence of problematic cannabis use at baseline, and yet some of them developed the disorder within the first 12 weeks of card ownership.

The study, which was funded by the US National Institute on Drug Abuse (NIDA), argued that clinicians, patients and authorities ought to carefully weigh the risks of cannabis use in a medical setting, especially for people with affective disorders that may make them especially vulnerable to addiction.

Regulation and distribution of cannabis to people with medical marijuana cards must also be greatly improved across the United States, Gilman said.

"There needs to be better guidance to patients around a system that currently allows them to choose their own products, decide their own dosing, and often receive no professional follow-up care," she said.