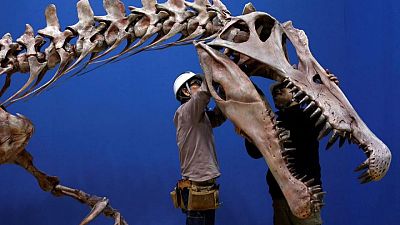 WASHINGTON – Spinosaurus, the largest-known carnivorous dinosaur, and its closest relatives long have confounded scientists trying to understand how these unusual water-loving beasts lived their lives and hunted prey. Did they wade into rivers and lakes like a heron? Or did they swim underwater like a hippo or croc?

It turns out that the answer was in their bones – their bone density, to be precise. Scientists said on Wednesday that Spinosaurus and its cousin Baryonyx possessed extremely compact bones that would have helped them stay submerged for underwater swimming as semiaquatic predators targeting large prey.

Both were members of a Cretaceous Period dinosaur group called spinosaurids that boasted anatomical adaptations such as elongated crocodile-like snouts and conical teeth for hunting aquatic prey. But the researchers found that another spinosaurid called Suchomimus lacked dense bones and likely was a wading predator – showing an unexpected degree of ecological diversity within this group.

Spinosaurus, about 50 feet (15 meters) long and weighing seven tons, lived 95 million years ago in Africa. Its anatomy was unlike any other dinosaur, with a relatively small pelvis, short hind legs, paddle-like tail and feet for propulsion in the water and a curious sail-like structure of bony spines 7 feet (2 meters) tall on its back.

“I think this animal is simply weird: we have nothing alive today that could be considered remotely similar,” said Matteo Fabbri, a postdoctoral researcher in paleontology at the Field Museum in Chicago and lead author of the study published in the journal Nature.

“I really like the idea of this giant animal, weighing many tons, submerging under water to catch prey. It is striking to me that it has a giant sail-crest on its back. That would have made it hard for it to hide under water, but much more ominous: a bit like a shark fin poking above the water line,” said University of Oxford paleontologist and study co-author Roger Benson.

In determining that greater bone density is directly associated with an aquatic existence, the researchers amassed data on 297 species of living and extinct animals, land-dwellers and water-dwellers.

Bone compactness was found to be a defining characteristic in animals adapted for life in the water such as whales, seals, dugongs, hippopotamuses, crocodiles, penguins and various extinct marine reptiles. No other dinosaurs were found with the bone density of Spinosaurus and Baryonyx, indicating they were alone among dinosaurs in conquering the aquatic realm.

Spinosaurus exceeds even Tyrannosaurus rex in size, but its anatomy has long puzzled scientists. Its original fossils from Egypt were destroyed during World War Two. But the discovery of a skeleton in Morocco in 2008 and additional tail bones dug up subsequently led some paleontologists to propose that Spinosaurus was semiaquatic and an active swimmer. Other researchers looking at the same fossils disagreed.

The new study was launched to try to settle the debate.

Big fish in rivers and lakes as well as dinosaurs walking along their banks may have been appealing prey for Spinosaurus.

“Spinosaurus was perhaps moving along shallow waters using a combination of ‘bottom-walking’ – like modern hippos – and lateral strokes of its giant tail,” said University of Cambridge postdoctoral researcher and study co-author Guillermo Navalón. “Probably used this means of locomotion not to pursue prey for long distances in open waters but to ambush and catch very large fish like lungfishes or coelacanths.”