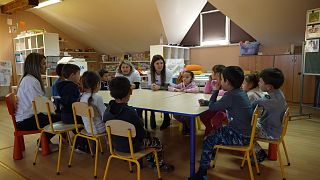 The EU’s European Child Guarantee aims to break this cycle of disadvantage, putting into action the European Pillar of Social Rights on child care and support to children.

Launched in March 2021, the Guarantee sets out the right to access to free education, including early childhood education and after school activities, a healthy school meal a day, healthcare , good nutrition and decent housing for all children.

One year after the launch, EU countries have to submit their national action plans to the European Commission, explaining how they will put the Child Guarantee into action. They will then have to report on their progress every two years.

What is the Child Guarantee?

The ‘Child Guarantee’ is an initiative of the European Commission, which aims to ensure that the most vulnerable children in the European Union have access to healthcare, education, childcare, decent housing and adequate nutrition, ultimately aiming to ensure progressive realisation of child’s rights in Europe

Putting the Child Guarantee into action to help Ukrainian refugees

According to the United Nations, one child per second in Ukraine is becoming a refugee of the war. The total number of people who have fled the country since the Russian invasion began has passed three million, with half of these children.

There are calls for EU governments’ national action plans on implementing the Child Guarantee to take into account the influx of Ukrainian refugees.

_"_In any war, children are the ones that pay the highest price,” says Jana Hainsworth, Secretary General of Eurochild, a network of organizations that work with vulnerable children.

_“_Currently, it is very difficult to comprehend the enormity of the devastation. Obviously, the most important thing is their lives, the humanitarian corridors, getting them out to safety. Member states will undoubtedly need to respond, and we are very keen that the national action plans take account of this latest challenge and make sure that the services and the investments that they make are going to be inclusive of the new migrants coming in from the Ukraine._”_

The Child Guarantee and the Roma Community

One of the targets of the Child Guarantee is the social inclusion of Roma children. Roma children are among the most precarious in Europe: 85% are at risk of poverty, compared to the 24% average. One of the ways aimed to tackle this is to improve education rates and access.

Real Economy's Fanny Gauret, headed to the Međimurje region in Croatia, where a large part of the nations’ Roma community lives. Here, more than 90% of children grow up in precarious conditions.

A pilot-program funded by the European Commission, in partnership with UNICEF, is helping Roma families keep their children in education.

The European Commission has collaborated with UNICEF to install Child Guarantee pilot programmes in 7 countries.

Fanny spoke to some mothers living in the Roma settlement of Kuršanec who were participating in this initiative.

Snježana Oršuš partakes in a workshop set up in the neighbourhood, to learn how to communicate better with her children. She also learns about child psychology, how to create a balanced relationship with her children and establish a positive routine.

“ I see the change. When my children are at the workshop, they play, they draw, and they have everything they need. When we get home, they ask me to do the same things, and we do it again. When I was a child, there were arguments between my parents. I said to myself that my children would never endure this, and that I will take good care of them. So that they can go to school, and always be clean.”

The pilot-program also opened an informal education and play space for children aged 3 to 6. Bojana, who speaks Romani language with her children, loves coming here.

_“I bring them to the workshop so that the children can socialize, they can talk, and learn to speak Croatian, because when they start going to school, it will be easier for them. I would like my children to have what I didn’t get, to finish school, to have a job.” _

While one year of pre-school education is compulsory in Croatia, only 30% of Roma children attend. This is significantly less than other Croatian children, where there is 80% attendance.

Fanny Gauret also met Andrea Krznar, the field coordinator for the Pilot program and Child Guarantee. She explains the goals of the program,

“We are strengthening the skills of the parents to create better opportunities for them to communicate better with their children. Many parents think their children are too young to enroll in preschool, because they have at home someone who can take care of them, the other reason is that services are expensive although there is some funding by the state, maybe sometimes some parents are not aware of this.”

The European Union also finances other programs for children, particularly thanks to the European Social Fund Plus.

One of the ways governments can implement the Child Guarantee is with money from the European Social Fund Plus (ESF+). Countries with the highest levels of child poverty must spend at least 5% of the funds they receive on tackling this.

Benjamin Ignac, an EU policy Analyst based in Berlin, highlights the importance of education and a positive, supportive home environment. He grew up in à Roma settlement like Kuršanec. Thanks to his family and teachers support, and scholarships, Benjamin studied in the United States, and at Oxford.

_“It was a lucky thing that my parents and my older brother taught me how to read, write and do some basic maths. When I saw how the Roma community in general was being treated by society, I realized education and financial freedom were my only hope to break the system. It had a huge impact on my life, when my teachers helped me navigate through my decisions. Therefore, school directors and teachers bear a big responsibility in this.__”_

One year on since the launch of the Child Guarantee: where are we?

EU countries must submit their action plans on how to put the Child Guarantee into practice in March 2022.

Euronews asked Jana Hainsworth, Secretary General of Eurochild, how hopeful she was that the Child Guarantee would be fully implemented by national governments.

“It’s a very important milestone. The national action plans are still coming in. Some are ambitious. Some lack ambition,” says Hainsworth.

She urges, “The child guarantee must not remain a commitment on paper. We want to see those national action plans become regularly updated documents, subject to constant reviews.”

The head of Eurochild also called for different sectors of society to work together. “It requires collaboration across all of the different ministries that are responsible and very importantly, it requires the involvement from the people who will be directly concerned by the policies. Therefore, we want to see involvement of the NGOs, but also the communities, the families, the children that are going to be receiving services."