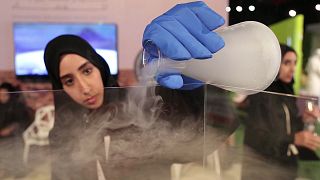 Arab women are playing a vital role in the development of science research and innovation across the Middle East. UNESCO figures show up to 57% of Science, Technology, Engineering and Mathematics graduates in Arab countries are women, while in the United Arab Emirates 61% of university STEM students are female.

Despite this, Alexandra Palt, Chief Corporate Responsibility Officer of L’Oréal and CEO of the Fondation L’Oréal, says that women scientists face different obstacles at every stage of their career. She told Euronews, “We see women drop out at different stages of their science career… it can be that environment, the parents, the family, the teachers can be discouraging when this goes on. There's gender bias. There is discrimination.”

To raise awareness and promote women scientists’ achievements, the L’Oréal-UNESCO For Women In Science Young Talents MENA Awards L'Oreal-UNESCO was held this year at EXPO 2020 Dubai. It recognized the achievements of 14 Arab female scientists from the Middle East and North Africa region, two of whom were from the UAE. They were celebrated for their ground-breaking research and fascinating discoveries in photonics and organ transplants.

One of the UAE winners, Dr. Ghada Dushaq said, “It is a field that requires a lot of patience. The type of research that we are doing is very special and requires a lot of resources, lots of dedication from us. But being in the UAE, I've been really honoured to be amongst lots of universities that offer for us the right environment to do the research.”

Emirati women in particular are continuing to make their mark with a growing presence in medicine and make up at least 35% of health sector employees in the country. Emirati winner, Halima Alnaqbi revealed, “As an Emirati woman in science. I was encouraged to pursue my degree in STEM, and I was also encouraged to go into the research career path from the government, from different mentors in my university.”

Women in the UAE are fast becoming pioneers and leaders in the field and support from Government and Dubai’s business communities such as Dubai Science Park, will continue to be essential going forward.

The COVID-19 pandemic has brought with it new challenges, including increased scientific demands and complexities, and the role of women in the UAE and Dubai has become more important than ever. Another example of women’s contribution to science is the UAE’s Emirates Mars Mission which launched from Dubai. Women made up 34% of the mission and 80% of the entire science team.

Sarah Al Amiri, UAE Minister of State for Advanced Technology, and Chairperson of the UAE Space Agency was a spokesperson at the EXPO 2020 Dubai International Day of Women and Science. She said, “I've had the privilege of working with remarkable women, especially on the science team of the Emirates Mars mission. They were all there, not because we impose a quota, but because we level the playing field. The best people for the job were working on the mission because you can't compromise on development.”

Increased global recognition and awareness through platforms such as the L’Oréal-UNESCO For Women In Science Young Talents Program, and the UAE’s continuous commitment to its women through more opportunities, both professionally and within the government, means the country is helping lead the region towards a more competitive, knowledge-based economy.