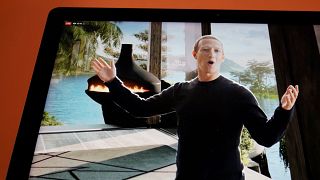 Employees at Facebook's parent company Meta have a new set of values - and new job title - to bring to work, CEO Mark Zuckerberg announced on Tuesday.

A series of new slogans encouraging employees to "live in the future," "move fast" and "build awesome things," replace Meta's original corporate values set out in 2007, the company CEO said.

Also among the updated slogans listed by Zuckerberg was the phrase "Meta, Metamates, Me," a play on a US Navy expression "Ship, shipmates, self," according to Meta's incoming chief technology officer Andrew Bosworth.

Fun fact: Metamates was coined by none other than Douglas Hofstadter himself after an employee cold emailed him for ideas after our rebrand. I love it!

Also the saying is a reference to a Naval phrase which Instagram has used for a while "Ship, Shipmates, Self"

"[Our values] have been remarkably durable, but a lot has changed during this time. We are now a distributed company. We have a global community and wide reaching impact. And we're now a metaverse company, building the future of social connection," Zuckerberg wrote in a Facebook post explaining the move.

News Feed, the scrolling wall of posts and advertising that constitutes Facebook's main product, will also be rebranded to simply "Feed", the company said on Tuesday.

The name change lessens the risk of confusion with a newer product, Facebook News, which launched in France on Tuesday.

Meta's internal rebranding comes after a turbulent month for the social media giant.

On Tuesday, the company agreed to pay $90 million (€79 million) to settle a class-action lawsuit over the company’s use of “cookies” in 2010 and 2011 that tracked people online even after they logged off the Facebook platform.

Lawyers for the case said the settlement is one of the 10 largest data-privacy settlements in American history. But it is a fraction of Facebook's $650 million (€571 million) settlement of a privacy lawsuit last year. In that case, the lawsuit claimed that Facebook used photo face-tagging and other biometric data without the permission of its users.

Earlier this month, the social media company's stock price tanked over 26 per cent in an afternoon, shaving $230 billion off its market capitalisation and becoming the biggest single-day drop of a company's value in history.

Analysts said uncertainty over Meta's newfound focus on the metaverse was making some investors uneasy.

"Meta is sacrificing its core business model for its fascination with the metaverse," said Rachel Jones, an analyst with the research firm GlobalData.

"Betting big on the metaverse isn’t a bad thing - the technology is set to be huge and provide a multitude of opportunities - but it will take at least another decade to really get going".