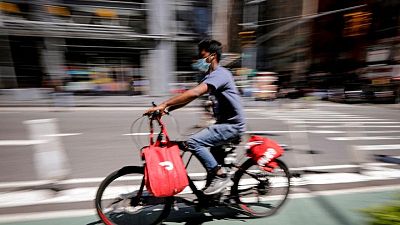 <div> <p><span class="caps">AMSTERDAM</span> – Just Eat Takeaway.com <span class="caps">CEO</span> Jitse Groen said on Sunday the company’s decision to de-list its shares from the Nasdaq stock exchange should not be taken as an indication of plans to sell its Grubhub subsidiary.</p> <p>The company announced its intention to delist its U.S. shares on Tuesday. Shares of the Amsterdam-based company remain listed on the Amsterdam and London stock exchanges.</p> <p>“This is a cost reduction measure,” Groen told Dutch television programme “Business Class” in an interview. He repeated that the company is still considering various strategic options for the subsidiary’s future.</p> <p>Takeaway, the largest food delivery company in Canada, Germany and Britain, bought Grubhub for $7.3 billion in June last year but has since come under pressure from shareholders https://www.reuters.com/article/just-eat-takeaway-investor-idINKBN2HF0N8 to sell the unit.</p> <p>In the interview, Groen repeated his conviction that only the largest food delivery players in each market will, eventually, be highly profitable. He acknowledged the company is “not number 1” in the U.S. where it competes with Doordash and Uber among others.</p> <p>“We have to get into a market position such as we have in the Netherlands, so that we can earn money,” he said.</p> <p>“We have a lot of discussions with people in the U.S. over Grubhub. (But) if you talk to people then you have to have the goal that it improves the business.”</p> <p>Takeaway’s shares closed at 38.25 euros on Friday, down 6% on the day. They have lost two-thirds of their value since reaching a peak above 109 euros in October 2020.</p> <p/> </div>