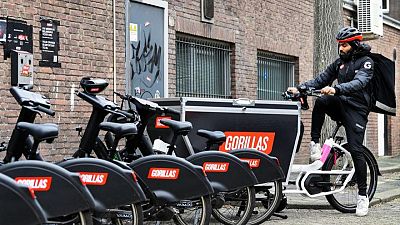 AMSTERDAM – Venture capitalists have invested billions of dollars in fast grocery delivery services such as Turkey’s Getir and Germany’s Gorillas and Flink, in a race to expand across Europe to meet soaring demand during COVID-19 lockdowns.

But this new mainstay of city life is facing pushback from some residents and authorities who see the services as a blight on neighbourhoods, complicating the loss-making companies’ efforts to scale up and become profitable.

At issue are the hundreds of small “dark stores” – distribution hubs for on-demand groceries where workers zip in and out on scooters, prompting complaints they are causing disruptions and are a nuisance.

Amsterdam and Rotterdam have reacted by slapping a one-year freeze on new dark stores. Other cities could follow in moves similar to those faced in Europe by ride-hailing service Uber and short-term home rental company AirBnB.

“The business model of these companies is that they want to deliver groceries in 10 minutes, that means they need to be based in neighbourhoods. That’s exactly the place where they also cause nuisance,” Amsterdam deputy mayor Marieke van Doornick said.

In London’s Islington and Berlin’s Kreuzberg neighbourhoods, residents have complained about the noise. In Paris, the deputy mayor has decried unmarked stores as a blight on the cityscape and called for them to seek licences as warehouses or face “financial consequences and penalties.”

Complaints include restocking and delivery going on 24 hours a day as well as traffic hazards from racing scooters.

“So we need to find out if that’s possible in a safe way, or they need to go places where they may not be able to deliver in 10 minutes,” Van Doornick said.

Industrial zones outside town are an option, she said — even if that does not suit the companies’ business model.

The three largest fast grocery companies in Amsterdam, Flink, Gorillas, and Getir, all pointed to the many customers satisfied with their services and say they want to work with city officials to resolve the problems.

Solutions that may hurt already thin margins would be operating during restricted hours or making extra space for couriers and their vehicles inside the tiny stores.

But a one-year freeze on new dark stores coming just after the companies received huge amounts of capital could torpedo their efforts to grab market share.

Flink, founded in Berlin in 2020, raised $1.1 billion last year and had planned to double its presence in Amsterdam by opening 10 new stores this year — including in some locations where it has already signed a lease. It says it is reviewing the legality of the freeze.

Gorillas, also founded in Berlin in 2020, raised $1.3 billion in 2021 from investors including Delivery Hero, said it was “surprised and disappointed” by the bans, which would force it to use existing hubs more heavily. It may have the most dark stores in Europe with 180 at last count, employing 2,000 in Amsterdam alone.

Founded in Istanbul in 2015, peer Getir raised more than $1.1 billion last year, counting Tiger Global and Sequoia Capital among its backers. It launched in Britain in January, in the Netherlands in May, in Germany and France in June, and bought rival Blok in July to expand to Spain, Italy and Portugal.

He said the company had created 1,500 Dutch jobs so far. “We’d like to continue to do that and multiply that number this year and into the future,” he added.

But “if a freeze is to be continued for a whole year…it will affect our ability to serve our customers.”

A halt on growth of the companies in city centres could also benefit their biggest rivals: meal delivery services including Just Eat Takeaway and Deliveroo, which are striking deals to handle delivery for existing supermarket chains.

Lucas Pettinato noted Getir was winning ground in Britain since October and in Germany since the start of 2022.

“Getir’s European performance over the last few months shows that there is growth potential for the quick-delivery industry,” he said.