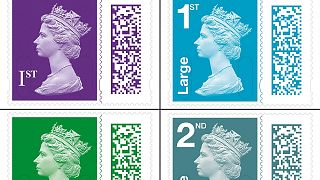 New UK postage stamps that include a QR code, that, to begin with, will allow recipients to view animated videos.   -   Copyright  AFP
By Euronews and AFP  •  Updated: 02/02/2022

Britain's postal service the Royal Mail announced on Tuesday that special barcodes will be added to its ordinary stamps, to improve mail processing but also allow people to send animated videos and messages to be sent to recipients.

A pattern similar to a QR code will appear next to the iconic portrait of Queen Elizabeth II. It can be scanned using the Royal Mail app.

"The introduction of unique barcodes on our postage stamps allows us to connect the physical letter to the digital world," said Nick Landon, the group's commercial director, said in a statement.

While it will improve "operational efficiency," the new generation stamp will also provide "additional security features and open the door to innovative services," the company said.

The barcoded stamps will have a "digital twin" linked by the Royal Mail app.

Initially, customers will be able to access a video of "Shaun the Sheep," a British animated series by the creators of Wallace and Gromit, Aardman studio.

Special episodes created exclusively for the Royal Mail will be released over the course of the year and customers will be able to choose the video they wish to associate with their mail.

Non-barcoded stamps will be valid until the end of January 2023 but can be exchanged for their digital duplicates, Royal Mail said.

The group, despite a loss of momentum in its mail business, benefited from the pandemic with parcel shipments soaring thanks to the closure of shops and retail outlets.

But after last year's peaks, the pace of deliveries slowed before Christmas as more shops opened, resulting in a 4.9 per cent fall in parcel revenue in the last three months of 2021.

The group announced last Tuesday that it planned to cut around 700 management positions to reduce its costs, after the Omicron variant led to 15,000 absences and costs of hundreds of millions of pounds.

Tracing its origins back 500 years ago, Royal Mail has had a troubled history over the past decade marked by its controversial privatisation in 2013.

Stamps with similar barcodes exist in other countries including France on international stamps and Germany, where trackable stamps went on sale in February 2021.