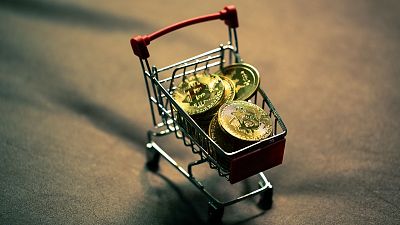 Crypto investors are turning to altcoins instead of Bitcoin to do do their shopping.   -   Copyright  Canva
By Pascale Davies  •  Updated: 17/01/2022

Bitcoin may be the most valuable cryptocurrency for now but consumers and businesses are leaning to other digital tokens for purchases, according to one of the world's biggest crypto payments processors.

Meanwhile, altcoins (coins other than Bitcoin which include Ethereum token Ether), stablecoins and memecoins accounted for BitPay’s major purchase tokens.

Why are altcoins on the rise?

There are several reasons why altcoins have been used more to make payments.

Firstly, crypto markets have been very volatile since early November. Bitcoin’s price rose 60 per cent last year and amid the unpredictability, many investors hold onto the crypto, seeing it as a long-term investment rather than trade or spend it.

Given Bitcoin’s price volatility, analysts say stablecoins have been seen as a safer bet for trading.

As for memecoins, Tesla chief executive Elon Musk has touted Dogecoin over Bitcoin, largely due to environmental reasons as it consumes less energy than Bitcoin mining.

On Friday, Musk said Doge can be used to purchase the company’s merchandise.

What did people spend their crypto tokens on?

BitPay said when crypto investors spent their tokens, many purchased luxury goods such as watches, cars, boats, jewellery, and even gold, which has come as a surprise as many potentially see Bitcoin becoming the commodity akin to the 21st century’s gold.

BitPay helps companies accept cryptocurrency payments and has been doing so since 2011, when few companies accepted digital coins. Now, the company says it processes around 66,000 crypto transactions per month.

More mainstream companies such as PayPal and fintech and wallet companies are entering the crypto payments space.

“A lot of it has to do with what we think about timing. In the next couple of years we are likely to see very substantial growth.”