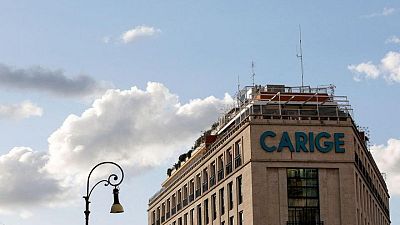 (Refiles to add name of Italian banking fund in para 2)

By Andrea Mandala and Valentina Za

FITD, the Italian banking fund that has owned Carige since a 2019 rescue, picked BPER on Monday over rival bids from Credit Agricole Italia and U.S. fund Cerberus, to negotiate a sale it hopes will end a seven-year crisis at the bank.

Carige shares had gained more than a third since mid-December on news of interest from BPER and Credit Agricole Italia, and were trading well above BPER‘s buyout offer price of 0.80 euros.

They fell 10.6% in early trade on Tuesday to 0.7996 euros, triggering an automatic trading suspension.

BPER, Italy’s fifth-largest bank, was the favoured bidder, with the country’s authorities keen on tie-ups between mid-tier lenders while some FITD members were wary of further expansion by Credit Agricole Italia, the largest foreign lender in the country.

Following a meeting of its steering committee on Monday, the FITD fund that owns 80% of Carige said that BPER would have four weeks to study the target’s financial data to agree on a sale no later than Feb. 15.

Italian banks spent 600 million euros to salvage Carige through the FITD fund, which must now pump more money into it to offload it.

Suitors BPER, Credit Agricole Italia and Cerberus had all offered a token 1 euro and asked for cash to cover restructuring and clean-up costs.

After initially demanding a 1 billion euro capital injection, which FITD rejected because it topped the 700 million euros it could spend, BPER on Monday said it had cut the request to 530 million euros.

Thanks to the tax incentives, BPER said it still expects the deal to have a neutral impact on its capital reserves and significantly boost earnings per share from 2023.

BPER would then buy out remaining investors in Carige at 0.80 euro a share.

“The deal terms are a bit less attractive than initially presented,” Citi analysts said. “But we believe that the deal still represent an opportunity for BPER.”

“This potential deal is a further step ahead into the Italian banking consolidation and removal of one of the main overhangs in the sector.”

Citi said BPER would focus on cutting Carige’s costs that ate up 93% of its income as of Sept. 30.

BPER has been steered onto an expansion path by its leading shareholder, insurer UnipolSAI, and last year boosted its assets by 40% by buying branches sold as part of Intesa Sanpaolo’s takeover of UBI.

Carige would further lift BPER‘s assets to about 155 billion euros, making it Italy’s No.4 bank and a more direct competitor to Banco BPM, the No.3 and a longstanding possible merger partner before the latest collapse in talks last year.

Analysts said the Carige deal further reduced the already slim chances of a BPER-Banco BPM merger, while BPER remained a candidate to take over smaller peer Popolare di Sondrio in which UnipolSAI is also a main shareholder.

(This story refiles to add name of Italian banking fund in para 2.)