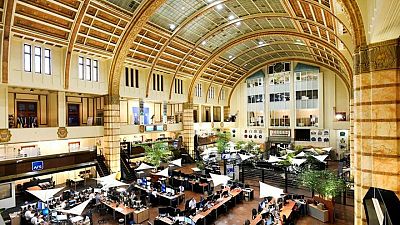 By Huw Jones and Elizabeth Howcroft

LONDON – Amsterdam ended 2021 as Europe’s top share trading venue, holding its lead over London despite efforts by the British financial centre to make its equity markets more attractive after Brexit.

Euro-denominated share trading by EU investors had to stop in Britain when the country left the European Union on Dec. 31, 2020. Much of the trading switched to Amsterdam, where pan-European Euronext has a base, along with the new post-Brexit operations of Cboe Global Markets and London Stock Exchange Group’s (LSEG) Turquoise.

Amsterdam overtook London as a share trading venue soon after Brexit, but the British city had managed to nudge back ahead in June

A deal with Switzerland to allow Swiss share trading to resume in London helped it claw back lost ground, but was not enough to secure the number 1 spot for long as other initiatives failed to gain immediate traction.

Britain in August made it easier to list special purpose acquisition companies or SPACs, long the darlings of investors on Wall Street, but by November just one had listed.

Euronext said it had 22 new SPAC listings, accounting for nearly half of all those coming to the market in Europe last year.

“It’s not a given nL1N2TL14P that people will want to come to London,” Catherine McGuinness, policy chief for the City of London, home to the financial district, told Reuters on Tuesday.

The Financial Conduct Authority introduced more flexible rules last month nL8N2SN25Q for listings on LSEG‘s premium segment in a bid to lure more tech companies, which Wall Street has been so successful in attracting.

Euronext, whose exchanges in Europe include Amsterdam, said last week it also had a record year with 212 new listings raising $29.42 billion.