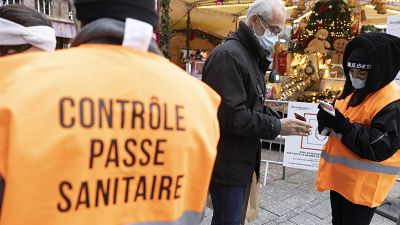 On Monday, French prime minister Jean Castex announced new legislation that would change the country’s current health pass - showing proof of a negative COVID-19 test, proof of vaccination or proof of having recovered from the illness - into purely a vaccine pass.

But as France struggles with a record-breaking surge in cases driven by the Omicron variant, government ministers have not entirely ruled out the possibility of introducing some form of a health pass for workers.

In an Interview with France Inter, health minister Olivier Veran, said he hoped parliament would consider stronger restrictions, including eventually implementing the health pass for workplaces, but clarified this would be a health pass and not a vaccine pass.

Still, unions and business groups have baulked at the prospect, with some calling it a covert attempt at instituting mandatory vaccination.

Others like Benoit Serre, vice-president of the National Association of Human Resource Directors, are concerned about how the health pass might be implemented and what the impacts may be.

"The real question is: what about employees who do not have a health pass? If we make it compulsory to go to the company's premises, do we make them remote work?,” he said.

“Do we suspend their work contract? This means that they remain employees, but they are no longer paid. Once again, this type of decision has to be measured, especially after 2 years of crisis when people are exhausted".

Serre also pointed to the struggles encountered by the hospital sector in France when the health pass was instituted there on September 15.

“We saw that there were people - that's their business, because there is no vaccination obligation - who refused to get vaccinated and so, from 15 September, they no longer had a job, so these are serious measures,” he said.

“Especially since we have an upturn in economic activity, and everyone knows that we are having trouble finding people to recruit".

While France may still be considering extending the pass to workplaces, some of its European neighbours have already implemented their own versions.

On October 15, Italy became the first European country to require a COVID-19 green pass for workers in all public and private workplaces.

The Italian Senate had voted heavily in favour of the measure with 189 in favour and 32 against.

Germany followed in their footsteps the following month, implementing the “3G rule,” requiring all workers to show proof of a negative test (Getestet), vaccination (Geimpft) or COVID-19 recovery (Genesen).