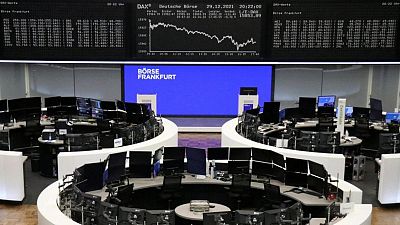 – European shares ended higher on Thursday on hopes fresh curbs and restrictions may not be needed to fight the pandemic going into the new year, but a surge in COVID-19 cases due to the Omicron variant kept a lid on gains.

The pan-European STOXX 600 rose 0.3%, up for the second straight week with the tech sector, healthcare and travel stocks <.SXTP>, in the lead.

Most European bourses including Germany’s DAX, France’s CAC40, Spain’s IBEX and London’s FTSE 100 were on-track to record gains for the second consecutive week.

However, risks of hawkish central banks decisions on rising inflation pressures and lingering concerns of recent jump in global Omicron cases have limited gains so far.

The European Central Bank is close to meeting its 2% medium-term inflation target and can unwind stimulus quicker than planned if price growth continues to surprise on the upside, Dutch central bank chief Klaas Knot told a German newspaper.

“Traders continue to shake off the headlines about the rising number of patients with the omicron variant … It is worrying that case numbers are high, but the low hospitalisation rates are determining the mood in the markets,” said David Madden, an analyst at Equiti Capital.

Spain’s IBEX rose 0.5% even as flash data showed consumer prices in December rose 6.7% across the country from the same month last year, the fastest annual pace of inflation since 1989.

France’s CAC 40 has jumped 29.2% year-to-date, eclipsing the STOXX 600’s gains, as hopes of an economic recovery boosted luxury stocks, even though the outlook for demand from Asia remains bleak into the new year.

Global COVID-19 infections hit a record high over the past seven-day period, Reuters data showed on Wednesday, as countries try to fight the pandemic while keeping economies open.

British Prime Minister Boris Johnson said this week he would not bring in new pandemic-related restrictions this year, while a curfew has been ruled out in mainland France.

Several European markets including Italy, Germany and Spain will be closed on Friday, while Paris and London will trade for half a session, ahead of the New Year.