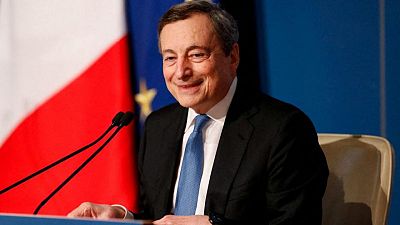 FRANKFURT – Italy is facing fresh questions about the viability of its debt as the European Central Bank dials back emergency support that has helped the euro zone’s most indebted economies survive the coronavirus pandemic.

Fighting the economic and health crisis has been expensive, with governments digging deep to help businesses and households. Italy’s public debt has increased from 134.8% of GDP in 2019 to a targeted 153.5% this year.

The ECB’s purchase since March 2020 of 250 billion euros of Italian debt under its Pandemic Emergency Purchase Programme (PEPP) has kept a lid on borrowing costs, however, with Italy’s 10-year bond yield lower now than before the pandemic at 0.9%.

But the prospect of PEPP ending in March has revived worries about Italy, the euro zone’s third-largest economy, which has a chronic growth problem and is big enough to destabilise the entire 19-country currency bloc.

“It seems likely that Italian yields would start rising significantly if the ECB stops buying Italian bonds,” Jesper Rangvid, a professor of finance at the Copenhagen Business School, said in his blog.

“The euro zone would be in trouble again.”

The euro zone’s central bank still has an older, smaller bond-buying scheme in place but that might also dry up within 12 months if inflation stabilises at its target of 2%, after wide swings during the pandemic.

Some have even evoked the euro zone debt crisis of a decade ago, which saw bond yields of Greece, Italy, Portugal and Spain spike as investors bet on a break-up of the single currency.

That ended when then-ECB President Mario Draghi pledged to do “whatever it takes” to save the euro – code for buying the bonds of troubled states.

“If the ECB stops buying, or removes the commitment to ‘whatever it takes’ purchases, debt service costs will rise again precipitating the doom loop,” John Cochrane, a senior fellow of the Hoover Institution at Stanford, wrote.

Much will depend on whether Italy can put to good use some 200 billion euros in grants and cheap loans from the EU’s Recovery Fund, available through 2026 provided Italy continues to meet Brussels’ policy conditions.

The former ECB chief’s credibility with markets and in Brussels is likely to afford some protection.

Yet the age-old weaknesses of Italy’s economy remain, including a low employment rate, stagnant productivity, lack of investment in education and technology, stifling bureaucracy and a yawning north-south divide.

And Draghi is widely tipped to be named soon as the new head of state, removing him from direct executive power in the final year before elections in early 2023.

“My fear is that … political parties will kick the can down the road and many reforms won’t be approved,” said Lorenzo Codogno, a former Italian Treasury official who now runs consultancy LC Macro Advisors.

Years of low interest rates have helped Italy build a buffer against a market storm.

The Italian Treasury has also taken advantage of the ECB’s generosity to extend the average maturity of its debt, shielding itself from a sudden flare-up in yields.

This has lowered the hurdle Italy needs to clear to keep its debt stable: that its pace of nominal economic growth is greater than the interest rate it pays.

“You don’t need a macroeconomic miracle to get a stable debt path. But of course you need some growth and inflation,” said Dirk Schumacher, an economist at French investment bank Natixis.

But Italy’s history of political instability and meagre growth suggests even that cannot be taken for granted.

A global rise in yields raises the risk that soaring markets around the world hit reverse, leaving weaker borrowers like Italy exposed.

If that happens, investors will want to know if ECB chief Christine Lagarde is ready to honour her predecessor’s pledge.

“I’m fairly confident the ECB would do what it takes, again, in the event of financial fragmentation,” said Frederik Ducrozet, a strategist at Pictet Wealth Management.

When Italy came under market pressure early in the pandemic, Lagarde, a former French finance minister and head of the IMF, said the ECB was “not here to close spreads” between euro zone countries’ bond yields.

While she backtracked on those remarks, doubts about her commitment have lingered.

“(It) still echoes in markets and undermines the ECB’s credibility,” said Carsten Brzeski, an economist at Dutch bank ING. “That was a rather expensive slip of the tongue.”