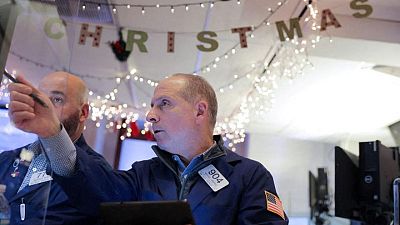 LONDON/HONG KONG – Global merger and acquisition (M&A) activity shattered all-time records in 2021, comfortably erasing the high-water mark that was set nearly 15 years ago, as an abundance of capital and sky-high valuations fuelled frenetic levels of dealmaking.

The value of M&A globally topped $5 trillion for the first time ever, with volumes rising 63% to $5.63 trillion by Dec. 16, according to Dealogic data, easily surpassing the pre-financial-crisis record of $4.42 trillion in 2007.

Technology and healthcare, which typically account for the biggest share of the M&A market, led the way again in 2021, driven partly by pent-up demand from last year when the pace of M&A activity fell to a three-year-low due to the global financial fallout from the COVID-19 pandemic.

Companies rushed to raise funds from stock or bond offerings, large corporates took advantage of booming equity markets to use their own stock as acquisition currency, while financial sponsors swooped on publicly listed companies.

“Strong equity markets are a key driver of M&A. When stock prices are high, that usually corresponds with a positive economic outlook and high CEO confidence,” said Tom Miles, co-head of Americas M&A at Morgan Stanley.

Overall deal volumes in the United States nearly doubled to $2.61 trillion in 2021, according to Dealogic. Dealmaking in Europe jumped 47% to $1.26 trillion, while Asia Pacific rose 37% to $1.27 trillion.

“While China cross-border activity has been modest, corporates from other Asian countries have stepped up to buy global assets. We expect to see this trend continue, especially for deals in Europe and the United States,” said Raghav Maliah, Goldman Sachs’ global vice chairman of investment banking.

A number of the year’s biggest transactions — AT&T Inc’s $43 billion deal with Discovery Inc and the $34 billion leveraged buyout of Medline Industries Inc — were announced during the first half of the year. [nL3N2N4326}

But the pace of dealmaking showed no signs of slowing in the second half.

On Nov. 21, KKR made a bid approach for Italy’s biggest telecoms operator, Telecom Italia, valuing it at roughly $40 billion including net debt in what would rank as the biggest ever private equity buyout in Europe should it go ahead, and the second largest globally.

Easy availability of financing drove private equity deals, with volumes more than doubling from last year to a record $985.2 billion, according to Dealogic.

“Investors are deploying cash at an unprecedented pace which means that, on a global basis, asset valuations have peaked to historic levels,” said Luigi de Vecchi, chairman of Europe, Middle East and Africa banking capital markets advisory at Citigroup.

“The question is whether the prices being paid now will continue to make sense over time.”

Pressured to make their businesses greener and more climate-friendly, company executives have been hunting for targets with the right climate credentials.

“Along with technology and digital transformation, sustainability is here to stay and is a key focus for most boardrooms,” said Citi’s de Vecchi.

After a year of lockdowns, Wall Street’s top investment banks pushed their dealmakers to meet more clients in person to win lucrative mandates to merge companies or defend them against raids by activist investors.

“There has been unprecedented demand for almost every single investment banking product,” he said.

After the record-breaking year, bankers are now anticipating a bumper bonus round in early 2022.

Breaking up corporate empires and conglomerates also proved to be a lucrative business for investment banks.

In the second half of the year, General Electric, Johnson & Johnson and Toshiba were among large corporates that announced plans to split up their core businesses and spin off several units.

The dealflow is showing no sign of slowing down as companies and investors rush to sign deals ahead of possible interest rate hikes.

Borrowing costs are widely expected to inch up in the coming months with the U.S. Federal Reserve indicating it will increase rates next year to combat soaring inflation. Nonetheless, bankers expect dealmaking activity to remain robust.

“I don’t think upward movement in interest rates alone is going to be the catalyst that sidetracks the M&A market,” said Morgan Stanley’s Miles.

Top deal advisers are concerned about the fallout from the U.S. Federal Trade Commission’s (FTC) increasingly adversarial stance towards merger activity over the past year, with Nvidia’s proposed $40 billion takeover of British chip designer Arm among the latest deals it is trying to block.

“The FTC and Department of Justice are already taking more time than ever before to evaluate deals, so companies pursuing M&A must be ready to discuss their deals with regulators up front, at any time,” said Krishna Veeraraghavan, an M&A partner at law firm Paul, Weiss, Rifkind, Wharton & Garrison LLP.

He added that companies would need to wait longer to get deals through – up to a year and a half versus the usual 6-12 months – and should go into a merger “willing to litigate”.

For all the headwinds, the year ahead still offers plenty of opportunities as the market for special purpose acquisition companies (SPACs) has recently reopened, with new listings in Europe, after coming under regulatory scrutiny in the United States.

“With private equity and with the dry powder in the SPAC world we expect the momentum to continue well into 2022,” said Philipp Beck, head of EMEA M&A at UBS.