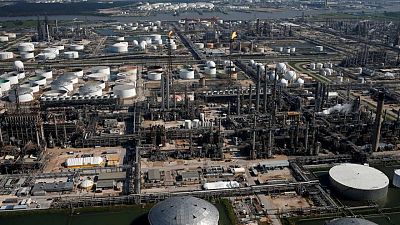 By Stefanie Eschenbacher and Erwin Seba

MEXICOCITY/HOUSTON – Royal Dutch Shell on Thursday confirmed a Reuters report that the sale of its controlling interest in a Texas refinery to Mexican state oil company Petroleos Mexicanos has been delayed until next year.

A review of the deal by the Committee on Foreign Investment in the United States, an national security group chaired by the U.S. Treasury, had been expected to wrap up this month but has been extended into next year, Shell spokesperson Curtis Smith said.

Shell in May disclosed an agreement to sell its 50% interest in the 302,800-barrel-per-day (bpd) Deer Park, Texas, refinery outside Houston to partner Pemex for about $596 million. The closing was expected this month, officials have said.

“We were hopeful we could conclude the sale before the end of the month, however, it now looks like the full amount of time will be needed,” Smith said. “We will continue to cooperate with CFIUS as they review the transaction.”

The CFIUS approval process runs until Jan. 13 for obtaining regulatory approvals, according to a Pemex source familiar with the matter.

“After CFIUS approval, the transfer process will take days,” said the source, who spoke on condition of anonymity.

The delay signals CFIUS has moved past its initial 45-day review and into a second, investigative period. The committee is charged with reviewing sales of critical U.S. infrastructure to foreign buyers for national security implications.

The second phase does not signal a potential rejection by the security group. Questions raised during the initial review can be resolved with a letter of agreement or a mitigation agreement, according to a former CFIUS official not involved in the Pemex review.