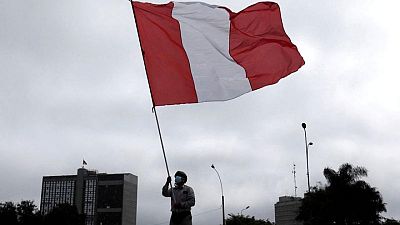 LIMA – Hochschild Mining is on a collision course with Peruvian communities near its key Inmaculada gold and silver mine, after local residents said on Wednesday the national government had told them it is feasible to legally shut down the mine, even as the firm says it plans to continue operations.

“We thought (the government) was going to … say the shutdown was impossible, but they have said it is possible to work on it while respecting the law,” said Che Bernaola, a leader in Peru’s Ayacucho region who has advocated for the mine’s closure over allegations it has polluted water sources.

Hochschild told Reuters ahead of the meeting that it expects to be granted approval to extend the life of its Inmaculada mine for 20 more years. It denies the pollution allegations.

The opposing expectations stem from what appear to be contradictory messages coming from the government of leftist President Pedro Castillo.

Last month, Prime Minister Mirtha Vasquez had said Peru would not back permit extensions for Hochschild’s Inmaculada and Pallancata mines, sending Hochschild shares down more than 50%, as well as hitting smaller players Apumayo and SAMI’s Breapampa.

But later, the government appeared to backtrack, saying that mining firms could still request permit extensions in adherence with regulations.

Activist Bernaola added that the government had agreed to begin visits on Jan. 13 to the four mining units to work on a closure plan.

“With respect to Apumayo and Breapampa, we should be starting with the shutdown already,” Bernaola said. “With respect to Hochschild, we need to revise all the documents and we will follow the law because people’s health is at risk.”

Peru’s mining ministry declined to comment on the meeting.

Inmaculada is key to Hochschild, providing some 60% of its cash flow and the company has a $4.4 billion investment plan for the mine. Without a permit extension, it is scheduled to close by the end of 2023.

“But there is no deal here, our lives comes first,” Asuncion Margarita Gutierrez, a district leader in Ayacucho’s Paucar del Sara Sara province, where Hochschild’s mines are located, told Reuters by telephone.

The standoff is a test for Castillo, who rode to power in July on the back of strong support in mining districts for his pledges to redistribute mining profits and give indigenous communities near mines a louder voice.

‘NO PLANS TO CLOSE’

Hochschild’s vice president of legal and corporate affairs, Jose Augusto Palma, told Reuters the company “has no plans to close” Inmaculada or Pallancata and that it had provided all the legal documentation necessary to extend the permits.

“We trust that the government will explain to the leaders the status of the current permits and those that are in process, and that it will respect the legal order that regulates the renewal of permits,” he said in emailed replies to Reuters.

Under Peruvian law, all mines have a planned closure date, which can be modified if more resources are found and if regulators allow it. The four mines in questions have closure dates ranging from 2022 to 2025.

Che Bernaola, representative of the Ayacucho Sur committee, said he expected the government to ratify the gradual closure of the mines.

“The only thing we can discuss at the table is how much reasonable time they need to shut them down, there is nothing else,” Bernaola said by phone.

Peru’s Environmental Assessment and Enforcement Agency (OEFA) has carried out 82 supervision tasks at the four mines between 2013 and 2021, government data show. It has identified breaches that have led to minor fines.

Julio Guillermo Gutierrez, president of a group in nearby Parinacochas, said the mines had to shut.

“We reaffirm our purpose to stick with the process of closing the mines, within the legal framework,” he told Reuters.

“For many years we have been tolerant, reasonable in our complaints, and now it is in the hands of the Executive; the state has to understand that we are also Peruvians.”