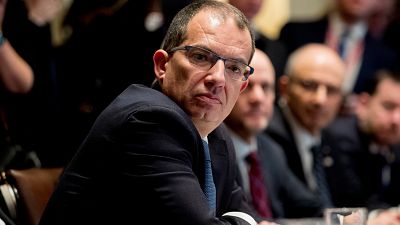 Moderna boss Stéphane Bancel said there was "no world" in which current COVID-19 vaccines were as effective against the Omicron variant   -   Copyright  Andrew Harnik/AP
By Tom Bateman  with AP  •  Updated: 01/12/2021

Existing COVID-19 vaccines are likely to be much less effective against the Omicron variant of the virus than previous variants, the CEO of drugmaker Moderna has warned.

Speaking to the Financial Times, Stéphane Bancel said the large number of mutations in the variant suggested that the world's COVID-19 vaccines may need to be adjusted to retain their effectiveness against the virus, should Omicron become dominant.

"There is no world, I think, where [the effectiveness] is the same level...we had with Delta," Bancel told the FT on Tuesday.

"I think it’s going to be a material drop. I just don’t know how much because we need to wait for the data. But all the scientists I’ve talked to...are like 'this is not going to be good'."

However, the global health body also emphasised that there were still "considerable uncertainties" over the impact the variant could have.

Why does the spike protein matter?

In a WHO technical brief provided to member states, the organisation described the variant as having "an unprecedented number" of mutations in the spike protein.

The spike protein is the part of the virus that is used to invade the body's cells.

The high number of mutations in Omicron's spike protein - believed to be between 26 and 32 - is potentially "concerning" as it could make the variant more transmissible and more resistant to the protection given by vaccination or recovery from other variants of COVID-19, the WHO said.

This is because current COVID-19 vaccines - both mRNA vaccines like Moderna and Pfizer/BioNTech and viral load vaccines like AstraZeneca - work by producing a copy of the coronavirus's spike protein within the body for the immune system to attack.

If Omicron's spike protein differs significantly from those of older variants, it could limit the effectiveness of the body's immune response.

But in an interview with UK broadcaster Sky, South African government adviser and epidemiologist Salim Abdool Karim said that while there was "very early evidence" of increased transmissibility and re-infection in vaccinated or recovered patients, people should not "make too much of the very early data".

"We'll only get the full picture in about three to four weeks from now. But at this point, we aren't seeing any red flags that we need to be particularly concerned about," he said.

Last week, German vaccine maker BioNTech said it expected more data on the new variant within two weeks, which could indicate whether or not it needs to update its COVID jab.

"Pfizer and BioNTech have taken actions months ago to be able to adapt the mRNA vaccine within six weeks and ship initial batches within 100 days in the event of an escape variant," the company said in a statement.

"[Moderna] and Pfizer cannot get a billion doses next week. The maths doesn’t work. But could we get the billion doses out by the summer? Sure," he told the FT.

Watch the full interview with Moderna's Vice President and head of Europe, the Middle East, Russia, and Africa, Dan Steiner, in the video player above.

Brazil and Japan report first cases of the omicron variant