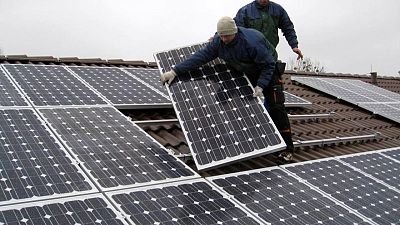 FRANKFURT – Germany’s next government must double down on its efforts to put an ambitious energy roadmap into law or risk missing renewable targets to offset an accelerated exit from coal, industry groups in the country said on Thursday.

The comments by leading utilities and industry associations highlight the need to cut down on red tape and create better conditions for investments after the renewables expansion in Europe’s top economy has slowed in recent years.

The coalition parties on Wednesday presented plans to exit coal power ideally by 2030, instead of 2038, and significantly speed up the availability of renewables to meet 80% of rising power demand by then.

Last year, coal accounted for 27% of the mix while renewables stood at 45.5%.

Andreae said the government’s very ambitious plan required the installation of 100-130 gigawatt (GW) of onshore wind by 2030, or 25-38 turbines per week.

In 2020 the weekly average was eight turbines.

To fix the bottleneck, Germany wants to implement simpler approvals, reserve 2% of land for wind power and also use every roof possible for solar panels to more than triple photovoltaic capacity to 200 GW by 2030.

“It is now a matter of implementing the plans quickly and creating the conditions for private investments in the conversion,” said Christian Bruch, CEO of Siemens Energy. “We have no time to lose.”

The coalition expects power demand to hit 680-750 terawatt hours a year by 2030 due to digitisation, electric car demand and the need to devote green power to producing hydrogen from wind and solar power via electrolysis.

The new target is up as much as a third from anticipated demand in 2021.

DVGW, the association for gas and water, welcomed the plans for hydrogen electrolysis to be scaled up to 10 GW by 2030, but stressed that out of the primary energy Germany uses, only 20% was electric.

The remaining 80% are coal, oil and gas that provide energy for industry processes, transport and heating buildings.

“The lion’s share has not been addressed,” DVGW chief Gerald Linke said.

The deal envisages that new gas-to-power plants, ready for hydrogen, are built to partly replace nuclear and coal-burning power plants, and that green hydrogen is ushered in after a transformation away from fossil gas.

Linke said the gas industry needed assurances that gas pipelines could be converted to transport hydrogen, that hydrogen imports would be scaled up alongside production, and that carbon capture and storage from gas becomes acceptable.

“If we don’t work on these areas, the coalition deal is too ambitious,” he said.