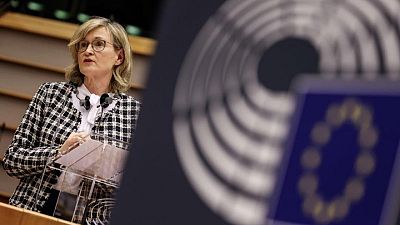 EU rules for settling securities, the final leg in a trade, includes mandatory buy-ins, meaning the buyer of securities has a right to find a third party like a securities depository to supply them if the original seller fails to deliver the securities.

The side of a transaction responsible for failure to deliver securities would have to pay any difference in price between the original transaction price and prevailing market prices, which could be costly during turbulent trading.

Failed trades are currently sorted out informally between the two counterparties.

EU financial services chief Mairead McGuinness said she welcomed a decision by the European Parliament and member states to postpone mandatory buy-ins, which were due to come into effect next February.

The Association for Financial Markets in Europe (AFME), which represents banks and investment funds, said buy-ins would lead to a more expensive and less efficient capital market for issuers and investors.

A planned review of the settlement rules next year should fundamentally reconsider mandatory buy-ins and lead to a more proportionate regime, said Pablo Portugal, AFME‘s managing director for advocacy.

The EU’s securities watchdog ESMA recommended in September a delay in the buy-in regime, saying it was aware of “serious difficulties” among market participants to be ready on time.

Rules on punishing failed trades will still come into force in February.

“So while many across the industry will welcome the Commission’s decision on buy-ins, preparation must continue at pace if firms are to meet the other requirements of the new rules when they come into force in February,” said Daniel Carpenter, head of regulation at Meritsoft, a post-trade fintech company.

Britain, no longer a member of the EU, has said it won’t introduce the buy-in rule it inherited from the bloc.