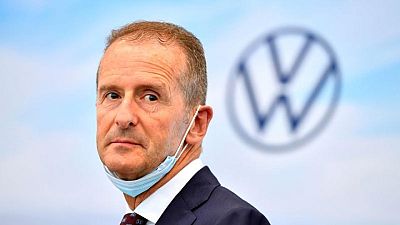 HAMBURG -Volkswagen’s supervisory board executive committee will meet on Tuesday evening to discuss the future of Chief Executive Herbert Diess, but further talks will likely be needed before a final decision is reached, three sources said.

Diess and union representatives have clashed in recent weeks over his management style and electrification strategy, after he warned that jobs could be lost if the process was not managed well.

An agreement between the eight-person committee – which includes works council head Daniela Cavallo and representatives for majority shareholder families Porsche and Piech – could depend on whether Diess agrees to change his management style, the sources said.

It was not yet clear whether a statement by Diess in an internal video interview with workers last week that the Volkswagen Group would pull back from the operational side of the business would be enough to satisfy the workers’ council.

Some details have already been agreed upon but further discussion will be necessary to reach a final compromise, the sources said.

Sources close to negotiations said a resolution would likely come as part of a package including the announcement of new board members, details on job prospects for employees, and investment plans for the group, Reuters reported on Monday.

“It looks as though the threads are coming together,” one of the people said on Monday.

One such appointment could be of adding Ralf Brandstaetter, CEO of Volkswagen’s namesake brand, to the management board, the people said, where he would take over responsibility for the mass-market brand group from Diess.