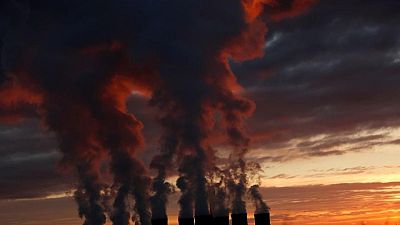 LONDON -Britain’s Drax is considering building a biomass plant in the United States whose power generation it says will absorb more emissions than it creates, its CEO told the Reuters Events Energy Transition Europe Summit on Tuesday.

Drax is developing technology to capture and store emissions generated from burning wood-based biomass pellets, which are categorized as renewable power, and hopes to have this up and running at a plant in Britain by 2027.

The company said that as well as the plant capturing the emissions it creates by burning pellets, the absorption of greenhouse gases during the growth of the wood means its overall impact will be carbon negative.

Green groups vocal at the COP26 climate talks in Glasgow this month have criticized the burning of wood biomass pellets, arguing it is not a carbon-neutral method of energy generation and that pellet production can contribute to deforestation.

“It’s very early stages, but we might go ahead and build another project in the U.S.,” Chief Executive Will Gardiner said. “Already we see there are corporates who are interested in buying negative emissions.”

Many companies have set net zero emissions targets which will require them to purchase carbon offset credits to compensate for the emissions they are unable to cut themselves.

Some corporate giants such as Microsoft have also said they are willing to pay a premium for removal offsets, which take carbon emissions out of the atmosphere.

Drax’s power stations provide around 6% of Britain’s electricity, and the company has converted most of its coal-fired power plants to biomass over the past few years.

Gardiner said Drax only uses wood residuals or byproducts from trees primarily used for lumber, and that demand for wood from sustainable managed forests can help increase forest growth.