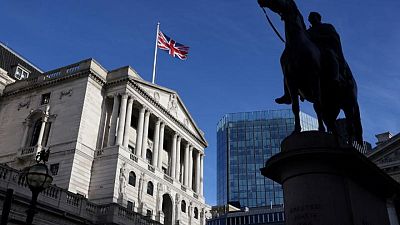 LONDON – British businesses reported the fastest growth in new orders since June this month alongside record cost pressures, according to a closely watched business survey that could pave the way for a Bank of England rate rise in December.

The IHS Markit/CIPS flash composite purchasing managers’ index (PMI), published on Tuesday, edged down to 57.7 in November from October’s final reading of 57.8. But that still indicated strong growth and was a shade higher than economists’ average forecast in a Reuters poll.

The Bank of England wrong-footed many investors at the start of this month by keeping rates at a rock-bottom 0.1%, after signalling an increase was on its way, because it wanted longer to assess the end of the government’s furlough jobs support programme on Oct. 1.

Data since then has shown consumer price inflation hit a 10-year high of 4.2% in October, while businesses continued to hire strongly and vacancies rose to a record high.

The flash, or preliminary, PMI showed a drop in net hiring to its lowest since April, but IHS Markit said that reflected recruitment difficulties rather than a levelling-off of demand.

Rising wages, higher energy bills and other cost pressures caused input prices in the composite index to rise at the fastest rate since the series began in January 1998.

But some services businesses said clients were pushing back at the scale of price increases, and prices charged rose at a slightly slower pace than October’s all-time high.

Orders rose, helped by reduced COVID-19 restrictions. While most coronavirus restrictions had been lifted in England by July, the more recent easing in travel restrictions was boosting services exports.

The BoE forecasts inflation will hit around 5% next year and its chief economist, Huw Pill, said on Friday that patience would be needed while it returned to its 2% target.

Higher interest rates will not mitigate the direct impact of a surge in energy prices and global supply-chain bottlenecks. But the BoE will hope they will reduce the chance of a spiral of wages and prices that could make higher inflation more permanent.