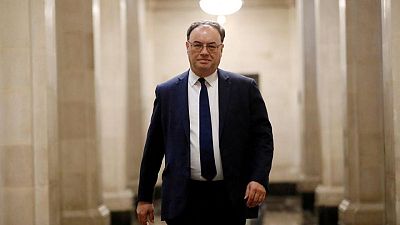 LONDON – Bank of England Governor Andrew Bailey said he did not believe that stablecoins were likely to evolve into a form of safe, regulated money, leaving central bank digital currencies as a more likely future for electronic payments.

“I think we have two choices broadly,” Bailey told lawmakers in the upper house of Britain’s parliament, as part of an inquiry into the future of digital payments.

“Is it going to evolve to some world of (asset-) backed stablecoins which has money-like features which could be regulated? I must say … I am sceptical about that.

“Or … is the better contribution, particularly to financial stability, to say the better alternative to that may be a central bank currency of digital form?”

Stablecoins are a form a virtual currency with values pegged to traditional assets such as the U.S. dollar or commodities, and their rise has accelerated discussion by central banks across the world about digital versions of their currencies.

Policymakers are concerned that a stablecoin or similar payment mechanism promoted by a tech giant – something Facebook has worked on for several years – could rapidly snowball and become dominant, raising competition, privacy and financial stability concerns.

The BoE and Britain’s Treasury said this month they would hold formal consultations in 2022 on whether to move forward on a possible central bank digital currency (CBDC) which, if approved, would be introduced in the second half of the decade.

In his appearance before the House of Lords’ Economic Affairs Committee on Tuesday, Bailey said he did not envisage the BoE offering digital bank accounts directly to savers.

“We do not see this as the Bank of England moving into the retail bank account business through a central bank digital currency,” he said.

Instead the BoE would provide the means of settlements to a regulated platform on which banks, and possibly alternative digital wallet holders, would operate.

The BoE would need powers over firms on the platform to protect privacy and the use of personal data, Bailey said.

Bailey also said work on a central bank digital currency was intended to solve problems linked to retail transactions and cash, and not as a tool to implement unconventional monetary policy such as a negative interest rate.