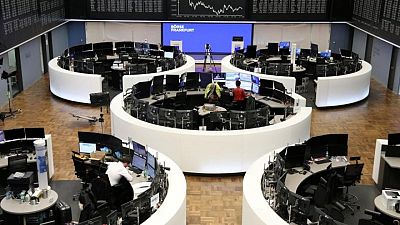 This came after a surge in COVID-19 cases prompted Austria to go back into lockdown.

KKR reportedly set an indicative price of 50.5 euro cents for its buyout offer – a 45.7% premium to TIM‘s closing price on Friday.

“The premium is very attractive, which is why we’re seeing a big jump in shares, but an interesting thing is going to be the Italian government’s response to the bid, which lays the groundwork for future outside offers – and all the important Italian companies who’ve fallen on tough times,” said Craig Erlam, senior market analyst at OANDA.

“The reappointment of Jerome Powell marks the return of the approach pursued by new U.S. presidents since 1980, namely reappointing the incumbent Fed chair in order to provide the continuity that markets crave,” said Chris Beauchamp, chief market analyst at IG.

The European benchmark logged its first weekly drop in seven weeks on Friday as worries about the impact of renewed COVID-19 restrictions knocked cyclical sectors such as automakers and banks.

But those sectors rebounded on Monday, with banks, mining and industrial companies all advancing.

In another telecoms deal, Norway’s Telenor climbed 1.5% after agreeing with Charoen Pokphand Group to merge their Thai units in a deal valued at about $8.6 billion.

Wind turbine maker Vestas skidded 2.5% after saying it was hit by a cyber attack that affected its IT systems and compromised data at the Danish firm.