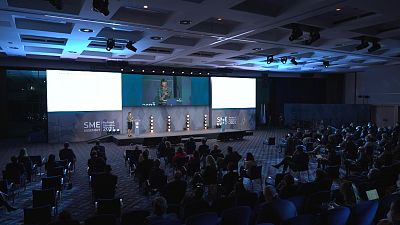 The three-day gathering brings together entrepreneurs, economists and policy makers. The post-COVID recovery dominated discussions, as did climate change and the recent COP26.

Hubert Gambs, the Deputy Director-General of the European Commission's Directorate-General for Internal Market, Industry, Entrepreneurship and SMEs (DG GROW) insisted European small business will have a vital role to play in the transition to a low carbon economy.

According to him, everyone must contribute, "Big companies, small companies, the different sectors of the economy", if we are to achieve our low carbon objectives. Consumers also have a role to play because a lot is determined by consumer choice. Emphasising that SMEs "are the bulk of companies" he said the European Commission would be there to support them.

Pipistrel is an innovative Slovenian Italian firm that makes small aircraft. The company is on a mission to change the future of flight and the planet having produced the world's first certified electric plane.

Used to train would-be pilots, the company's two-seater Velis Electro has a flight time of one hour. Demand for the aircraft is soaring, but that’s just the beginning of the company’s ambitions. According to Ivo Boscarol, the founder and CEO of Pipistrel, in five years the firm will have an aircraft that can fly 600 kilometres reaching speeds of 300 kms/hour. This aircraft will be available in two to four-seaters.

Pipistrel is also developing a fully electric unmanned flying van that will be able to transport around 400 kgs. Boscarol says the aircraft will reduce both emissions and noise pollution.

But not every SME can produce the game-changing technology needed to save the planet.

A hot topic this year was how to get ordinary company's to cut their emissions as Europe hopefully emerges from the pandemic. Professor Lučka Kajfež Bogataj, Climatologist and Nobel Peace Prize Laureate, argues that to do this effectively small businesses need to set targets. For her that means, reducing emissions by around 10 percent every year.

"Every entrepreneur needs energy, needs water, [and this] has an impact on the planet", she says. Everyone needs to "get better informed about climate change consequences" because businesses will need to adapt as there are risks if they don't. Her advice to SMEs is to learn and try to decarbonise as soon as possible and as much as possible.

Gambs insists the European Commission is completely focused on helping SMEs adapt and seize the opportunities associated with this green revolution. He explained the Commission will continue to offer advice and financial support to firms so that they can both reduce their emissions and thrive post-COVID.

In addition to tackling some of the big challenges facing firms right now, the gathering also rewards initiatives and showcases the very best of Europe’s entrepreneurial talent.

This year, the Grand Jury Prize for the European Enterprise Promotion Awards went to a German organisation called COMPETENZentrum für Selbständige. It provides advice, coaching and networking opportunities for migrant women so that they can become self-employed or set up their own small business.