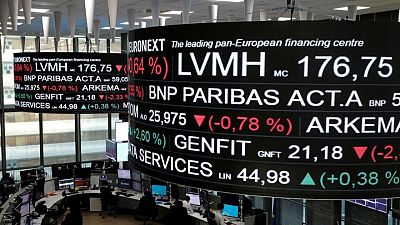 LONDON -Pan-European exchange Euronext said on Monday it will clear all trades on its newly acquired Italian platform by 2024, helping the European Union cut its reliance on the London Stock Exchange for core financial activities after Brexit.

Currently most Euronext clearing in stocks, derivatives and commodities is handled by the LSE‘s LCH unit in Paris, which Euronext has not been able to buy outright.

Setting out Euronext’s strategic priorities to 2024, its Chief Executive Stephane Boujnah said the group, which operates seven stock markets across Europe, would build on its acquisition of the Milan exchange earlier this year.

Closer ties with LCH, which is ultimately controlled by a company now outside the EU since Brexit, was not as attractive as expanding in-house clearing, Boujnah said. “The numbers and the strategy were compelling.”

Exchanges have long sought to have control over clearing to generate more income.

Although Euronext business is only a “small part” of LCH in France, the exchange will pay a break-up fee to the LSE when it serves a one-year notice period in 2023 on the current contract, which was due to run until 2027.

The LSE said the loss of business is less than 1% of group revenue and won’t affect LCH‘s repo, credit default swaps and forex clearing in Paris.

Boujnah said it will be up to the LSE to decide if it wants to buy Euronext’s 11.1% stake in the Paris arm of LCH.

Moving clearing to Italy is likely to be welcomed by EU policymakers who are seeking to build up the bloc’s capital market autonomy and end reliance on the City of London since Brexit, with the LSE‘s dominance in euro swap clearing a key target for relocation to Deutsche Boerse in Frankfurt.

Since Britain left the EU last December, Amsterdam has become the biggest stock market in Europe as swathes of trading left London for the bloc, with the Dutch capital also attracting international listings that would otherwise have gone to London, Boujnah said.

Probably no acquisitions are expected in coming months, he added, but he does expect targeted “high value-added” deals “as soon as practicable” in areas like post-trade, forex, niche data players or corporate services.

Euronext is targeting revenue growth of 3% to 4% a year to 2024 compared with 2020, and average annual growth in earnings before interest, taxes, depreciation and amortization (EBITDA) of 5% to 6%.

Capital expenditure is set to remain unchanged at the rate of 3% to 5% of total revenue.

The pre-tax savings rate by 2024 from the merger with Borsa Italiana has been increased by 67% to 100 million euros, helped by expanding clearing and relocating the core data centre from Britain to Italy from 2022 due to Brexit, Euronext said.

There are concerns in Italy that savings will mean cutting jobs in Milan, but Boujnah told a news conference there will be more people working at Borsa Italiana in three to four years’ time than at present.

Some teams in Italy will need “adjusting”, but this is achievable through voluntary departures, Boujnah said.