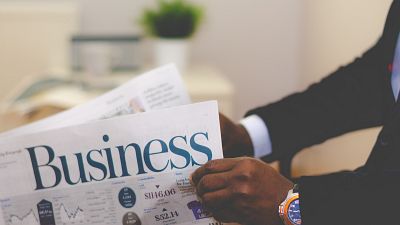 Corporate remuneration must be linked with short- and long-term climate goals   -   Copyright  Unsplash
The opinions expressed in this article are those of the author and do not represent in any way the editorial position of Euronews.
By Carmine de Franco  •  Updated: 05/11/2021

Since the Paris Agreement in 2015 has legally bound countries, and by extension, society at large, to limit global warming below 2°C and ideally below 1.5°C, we have seen numerous commitments from governments and companies towards the goal.

Corporates, and the private sector in general, will have to make a substantial contribution to the huge global challenge, all the more so if governments do not do what's needed.

The most common approach consists of setting a long term, net zero target, typically in 2050, for a company’s total carbon emissions.

Currently however, only the most ambitious companies are backing their claims with measurable targets and intermediate milestones. In theory, such targets would allow investors, and stakeholders generally, to verify and track their progress before it’s too late.

Particularly for companies, setting carbon emissions reductions targets or planning to align their business to the Paris Agreement has become an important consideration for management. This is either because it is in their commercial interest, or because shareholders, particularly those of public companies, and financial regulators, require them to do so. It also demonstrates to the public a broader sense of responsibility to society, which increases trust.

##  Climate targets set too far into the future

Yet for many companies the commitment to climate transition is too low a priority in the near term and too vague as a long-term objective. This signals a willingness to contribute to the challenge of climate change, but with targets that don't represent a serious effort.

Furthermore, targets are set too far into the future. Society therefore cannot be blamed for not taking them at face value. It should be noted that this lack of follow-through is not exclusive to the corporate and private sectors.

As recently as May 2021, the German Constitutional Court held that the German government’s Climate Change Act was partially unconstitutional because, among other things, it placed an unfair burden upon future generations to significantly reduce their carbon emissions.

To some extent, this is to be expected: as long as senior management’s focus and incentives, including remuneration, are linked predominantly to short-term financial performance, the rational policy is to delay costly investments.

In corporate parlance, this was equivalent to setting soft short-term targets, a kind of low hanging fruit, while shifting the real burden to future company managers and their shareholders.

To some extent, this is to be expected: as long as senior management’s focus and incentives, including remuneration, are linked predominantly to short-term financial performance, the rational policy is to delay costly investments.

Rethinking governance with a multi-generational view

The scale of the climate challenge, which will continue long after 2050, requires policies that must be sustained over time.

Strategies to achieve this should permeate the entire structure of every company. A historical example of the effort required, although in a very different and dramatic context, was George F. Kennan’s Soviet containment thesis that underpinned US foreign policy for almost 50 years.

The strategy and goals outlined in his famous telegram in 1946 were sustained over many decades by successive US administrations in various social contexts.

Its longevity was in part thanks to the governance structure of the US Department of State. It may seem strange today that such a policy could be implemented with such consistency and an eye on the ultimate goal over such a period of time.

This is where corporate governance structure and the framework that underpins how corporates operate is key.

For such a challenge to be met, these will most likely need to be updated by many companies so that long-term planning and targets are sustainable, even if they may be costly in the short term.

To align long-term strategy with incentives, boards and shareholders should consider management remuneration in terms of “values” that go beyond financial performance.

They should include short and long-term sustainability and climate goals. Governance is therefore an essential condition without which ambitious and effective climate solutions will not work.

The role of investors and company boards

Considering the above, investors have a two-fold role: firstly, they should push companies to achieve ambitious objectives for climate change transition. Secondly, they must engage with companies on how these objectives can be achieved with measurable guiding policies.

For example, reducing exposure to fossil reserves and potential emissions by simply disposing of or divesting those reserves will obviously help improve environment ratings, but without providing an effective contribution to climate change, since those reserves may continue to be in use under the stewardship of another, less transparent owner.

Similarly, reducing the highest-to-median salary gap by externalising corporate functions that are usually associated with low pay levels will not lead to a societal improvement.

These examples are extremes and not necessarily representative, but they highlight a problem that is well known in both the corporate and financial investment communities: when the distinction between an objective and its measurement becomes blurred, the strategy to achieve such a goal becomes one that is prone to manipulation.

In other words, when indicators become targets, they stop being effective measures of such a goal and a distraction from effective action.

Investors of all kinds, including institutions, sovereign wealth funds, private investors and savers, have a significant role to play in pushing for changes in corporate strategy where companies are failing to respond properly. If companies do not play their full part in climate action, it will not happen in time.