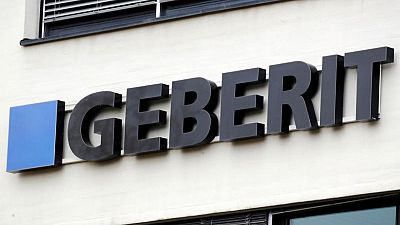 ZURICH -Geberit is seeing “significant challenges on the raw materials markets,” the Swiss building supplies company said on Wednesday, as higher costs weighed on profit growth during the third quarter.

The maker of piping and bathroom ceramics became the latest construction company to warn about higher expenses as the sector sees a resurgence in building activity after the pandemic shutdown last year.

Suppliers making stuttering restarts to production and bunged up logistics networks have also raised the costs for companies like cement maker Holcim, while energy prices are ticking upwards too.

Geberit said its bill for raw materials surged 15.6% during the three months to the end of September, curbing operating profit growth.

Raw materials are set to remain a challenge, with Geberit expecting prices to rise by around 3% in the fourth quarter compared with the third quarter.

The company, whose results are seen as a proxy for the wider construction industry, uses metals like aluminium and zinc, plastics and ceramics in its products, which are used in new-build and refurbishment projects.

After a strong first half, Geberit said it was seeing growth trends slow down, as flattering comparisons with pandemic-hit 2020 figures faded.

It was also seeing a normalisation in stock levels at wholesalers, who had previously driven high demand by building up their inventories, and the first sign of a slowdown in the home improvements trend.

Still, Geberit said its third-quarter sales were 17.4% higher than the pre-coronavirus third quarter of 2019. It upgraded its profit guidance, sending the shares 1.9% higher in premarket activity.

The company now expects full-year net sales in local currencies to increase between 12% and 14%, roughly in line with its previous guidance.

It also expects an EBITDA (core profit) margin of 30% to 31%, slightly higher than its previous guidance for the upper end of its medium-term target range of 28% to 30%.