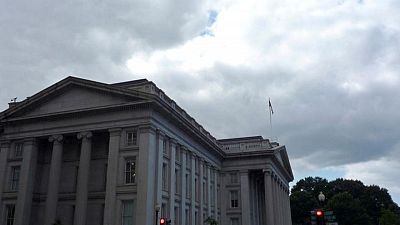 NEWYORK – A surge in the yields of short-term U.S. government debt has investors focused on the shape of the Treasury yield curve, where the yield advantage that longer-dated securities usually hold over shorter-dated ones is on track to narrow at its fastest pace since 2011.

Money managers and economists often view a shrinking of the gap between yields on shorter-term Treasuries and those maturing out years – known as yield curve flattening – as a sign of worries over economic growth and uncertainty about monetary policy.

Here’s a quick primer explaining what a flat yield curve is and how it may reflect investor expectations.

WHAT IS THE U.S. TREASURYYIELDCURVE?

The U.S. Treasury finances federal government budget obligations by issuing various forms of debt. The $14.8 trillion Treasury market includes Treasury bills from one month out to one year, notes from two years to 10 years, as well as 20-and 30-year bonds.

The yield curve plots the yield of all Treasury securities and investors watch its shape to extrapolate market expectations for U.S. growth and monetary policy.

Typically, the curve slopes upwards because investors expect more compensation for taking on the risk that rising inflation will lower the expected return from owning longer-dated bonds. That means a 10-year note will often yield more than a 2-year note because it has a longer duration. Yields move inversely to prices.

From time to time the yield curve can invert, a phenomenon that is considered bad news for the short-term economic outlook and has presaged past recessions.

The Federal Open Market Committee is widely expected to announce at the conclusion of its November monetary policy meeting on Wednesday that it will begin tapering its $120 billion-per-month bond buying program.

While that move has been well-telegraphed to investors, some are starting to worry that surging inflation will force the central bank to unwind its bond buying faster and eventually raise interest rates sooner than investors had expected.

Expectations of sooner-than-expected rate increases have pushed short-term yields higher in recent days. Longer-term ones have fallen in part due to bets that a potentially more hawkish rate policy will successfully tamp down inflation, precluding the need for raising borrowing costs as high as previously projected over the longer term, analysts have said.

Rate increases can be a weapon against inflation, but they can also slow economic growth by increasing the cost of borrowing for everything from mortgages to car loans.

The Federal Reserve has signaled that it does not expect to raise interest rates until next year and that borrowing costs should rise to at least 1% by the end of 2023 from its current rate of 0 to 0.25%. [L1N2RO2FM]

No. Distortions can occur anywhere along the curve without inverting the entire curve. On Thursday the yield on the 20-year bond rose above the 30-year bond.

The phenomenon is not confined to the United States. Short-term rates have climbed in Australia, Germany, Canada and other countries where central banks are projected to tighten monetary policies at a faster-than-expected pace.