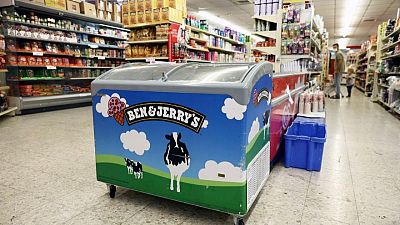 In a statement sent by a spokesman, New York State Comptroller Thomas DiNapoli said a review found the company and its subsidiary “engaged in BDS activities,” referring to the “Boycott Divestment Sanctions” movement that seeks to isolate Israel over its treatment of the Palestinians.

Pension officials in other states including New Jersey, Arizona and Florida have also moved to sell shares in Unilever or restricted the purchase of new stock for similar reasons.

Ben & Jerry’s moved in July to end a license for its ice cream to be sold in the West Bank and East Jerusalem, saying sales there were “inconsistent with its values.” Most countries consider Israeli settlements on occupied Palestinian land to be illegal. Israel disputes this.

Some American Jewish groups such as the liberal-leaning J Street have also raised concerns about Israel’s settlements and opposed calls for actions against Ben & Jerry’s or Unilever.

Unilever had said the decision was made by Ben & Jerry’s independent social mission board, and said it does not support the BDS movement.

In a letter to DiNapoli’s office in August, Unilever CEO Alan Jope said Unilever is committed to its business in Israel, where it employs nearly 2,000 people, and said the Ben & Jerry’s brand will remain in Israel.

“We have welcomed this decision to stay in Israel emphatically, and have been seeking to handle this matter in as respectful and sensitive way as possible,” Jope wrote.