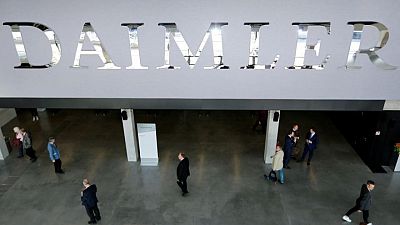 LONDON -Daimler AG reported a higher quarterly profit on Friday despite a 30% drop in Mercedes-Benz unit sales due to a global semiconductor chip shortage, as it focused on more profitable luxury cars and cut costs, and said it should meet its 2021 profit targets.

The German premium carmaker said it expects chip supplies to improve in the fourth quarter. It said the shortage should continue in 2022 but should improve compared to 2021.

The company has previously warned the global chip crunch could last into 2023.

“This (chip) issue will continue to be a top priority for us moving forward,” Chief Financial Officer Harald Wilhelm told analysts during a conference call.

Wilhelm also told analysts Daimler is transferring development and manufacturing activities for compact and midsized combustion-engine transmissions to contract manufacturer and auto parts supplier Magna, so the German carmaker can focus on electrifying its model range.

“The future of Mercedes is all electric,” he said.

Daimler shares are up 45% year to date, the strongest gain among German carmakers.

The chip crunch has pummeled the auto industry this year. Carmakers, which shuttered plants as the COVID-19 pandemic took hold last year, have found themselves competing against the sprawling consumer electronics industry for chip supplies.

Supply chain snarls from a fire at a chip-making plant in Japan to coronavirus lockdowns in Malaysia, central to global chip supplies, have only compounded the problems.

The shortage of chips, used in everything from brake sensors to power steering to entertainment systems, has led automakers around the world to cut or suspend production, pushing up both new and used vehicle prices amid robust demand from consumers.

This week world No. 2 carmaker Volkswagen AG cut its outlook for deliveries, toned down sales expectations and warned of cost cuts as it reported a lower-than-expected quarterly operating profit.

Other major carmakers, including Stellantis, General Motors and Renault, have also seen their quarterly results hurt.

Daimler said it had kept a “tight grip” on costs during the third quarter as it focused on more profitable models including in its Maybach and performance AMG brands.

management is on track to lowering the break-even point at Mercedes Cars,” Bernstein analyst Arndt Ellinghorst wrote in a client note.

Daimler said it now expects Mercedes-Benz to post slightly lower sales in 2021, but maintained its forecast of an adjusted margin of between 10% and 12%.

It also maintained its forecast of a margin of 6% to 8% for its Daimler Trucks unit, which is due to be spun off in December.

Its revenue slipped to 40.1 billion euros from 40.3 billion a year earlier.